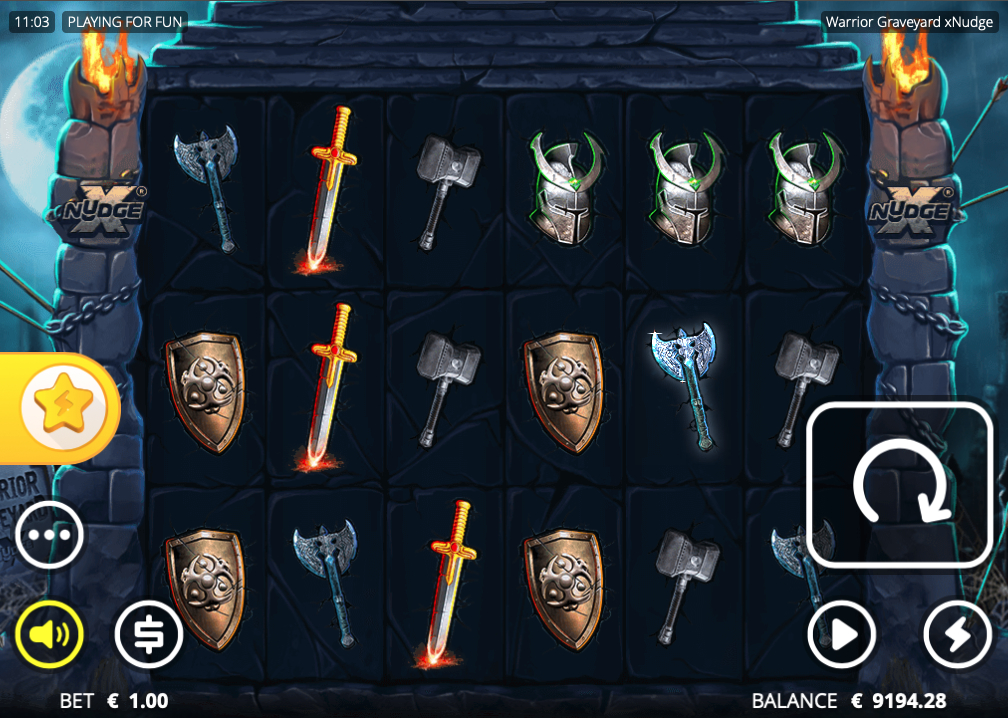 There’s a place where fallen fighters are buried when their violent life eventually comes to an end and it’s the theme of this creepy online slot from Nolimit City – it’s called Warrior Graveyard xNudge and from £0.25 per spin it promises players Graveyard Spins, Death Spins, Warrior Attacks and the xNudge feature which can multiply wins.

The highest value symbols are five stacked, departed warriors in red, orange, green, blue and grey; the lower values are their respective weapons and armour – swords, shields, helmets, axes and hammers. The skull is the regular wild and the scatter symbol but there’s also the tombstone wild which has its own feature.

The tombstone wild symbols is stacked three symbols high and it appears everywhere except for reel one; whenever it lands partially in view it will nudge fully into view, increasing the multiplier for any win by 1x with each move.

This is triggered by landing at least three matching dead warriors anywhere on the reels and they will now nudge fully into view, increasing the win multiplier by 1x with each nudge. They’ll also now move to the left hand side to fill up the reels starting from reel one before the payout is made.

Buy straight into the Graveyard Spins for 72x the stake.

Buy straight into the Death Spins for 666x the stake.

Warrior Graveyard xNudge is great fun and it combines a creepy, cartoonish atmosphere with lots of different bonus features to offer the possibility of some really big wins. There’s a decent RTP of 96.16% in the base game but this increases to 96.20% and 96.62% in the Graveyard Spins and Death Spins respectively.