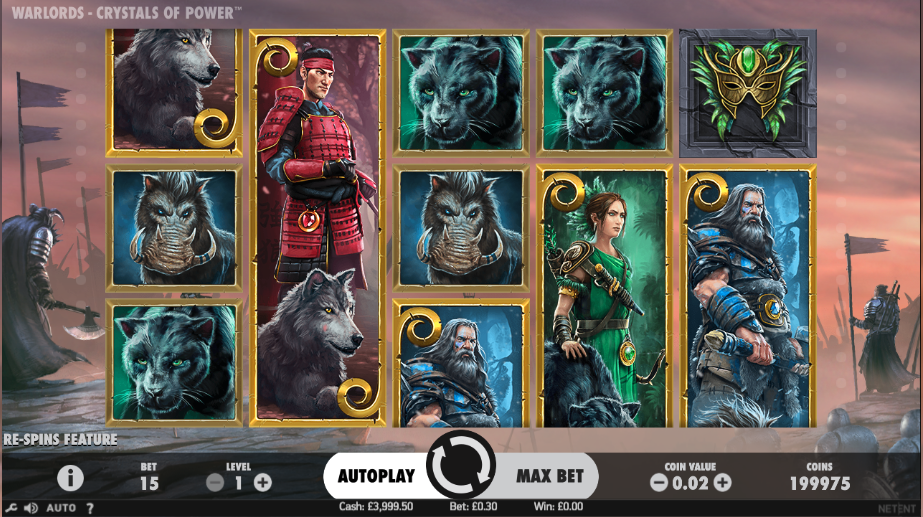 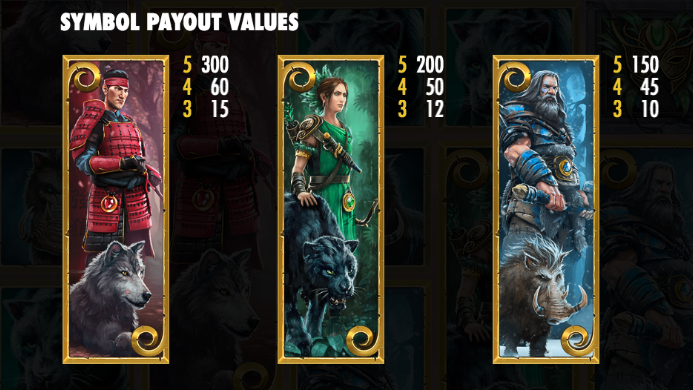 Brand new from the development studios of Net Entertainment is this epic-looking fantasy-themed online slot telling the story of three warlords – The Barbarian, The Priestess and The Samurai – and their quest for the Crystal of Power. It comes with some fantastic graphics and lots of bonus features.

Warlords: Crystals of Power is a five reel slot with three rows and thirty fixed paylines; those reels spin against a battlefield backdrop as soldiers slowly make their way towards the front line to fight for their Warlord of choice.

The three Warlords appear as stacked symbols on the reels and the regular sized ones are their three pets – a wolf, a panther and a wild boar; their three masks make up the lower values.

The wild symbol is a selection of gems in a gold inlay and it will substitute for all others except the scatters – they are the red, green and blue banners of the Warlords and appear only on reels two, three and four.

This is initially triggered by landing at least two of the scatter symbols anywhere on reels two, three and four and the first thing that happens is a battle sequence to make the scattered banners the same colour. Once they all match there’ll be the Re-Spins phase which grants one spin which can award more scatter symbols. You will need at least three matching to activate the Free Spins phase but if this doesn’t happen there’s a final chance to get one more – a burning rock will hit one symbol position, hopefully revealing a scattered banner.

If, after all that, you have three matching symbols then the free spins will begin and their type will depend on the colour of the scatters:

This occurs randomly during the base game and will award one of the following:

Warlords: Crystals of Power is quite a complex game so hopefully we’ve explained it in a simple way – it’s very enjoyable though and easily lives up to Net Ent’s high standards of graphics, animations and gameplay. The bonus features get triggered regularly and there’s an RTP of 96.89%.