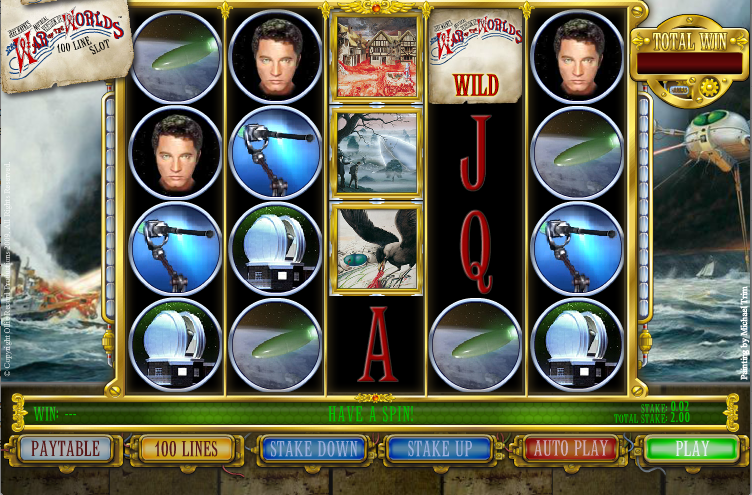 Some online slots are a real treat to review and play and War Of the Worlds from IGT is one such game; shame on you if you don’t know that this is based on the 1898 H. G. Wells novel but it also takes it’s background music and sound effects from Jeff Wayne’s 1978 concept album which features the famous narration of Richard Burton.   War of the Worlds tells the story of the Martian invasion of London and the narrator’s efforts to be reunited with wife.

This is a great-looking slot with a genuine late Victorian vibe; the five reels and one hundred paylines are set inside a polished and ornate metal frame with a view of the invasion site in the background.  As well as J, Q,  and A the symbols include the alien vessel, the Martians heat ray, the observatory, Richard Burton, a bird, the red weed, the invasion site and one of the Martian’s tripods.

The bonus symbols are a War of the Worlds wild and a tripod bonus which triggers the feature.

In the original novel, the British army are involved in several military encounters with the invading Martians and that’s what you get to relive in this feature.  Land three of the tripod scatter symbols and, as you can see from the video below, you’ll be able to battle three of the tripods.

The War of the Worlds logo is the wild symbol and if you land two on the same reel it will expand to fill that reel, providing you with lots more winning opportunities.  The expanded symbol features a full size tripod.

You can’t change the number of paylines you play but we think you can alter the way you play the bonus game to your advantage; we’ve had the most success by charging the guns up fully before firing them and, at least in the first round at Horsell Common, it takes just two shots to destroy the tripods.

What a brilliant slot; it remains very faithful to the novel and the inclusion of the music from Jeff Wayne’s concept album is a stroke of genius.  The Fighting Machines bonus game is great fun, especially if you play manually so turn the volume up and try this slot out.