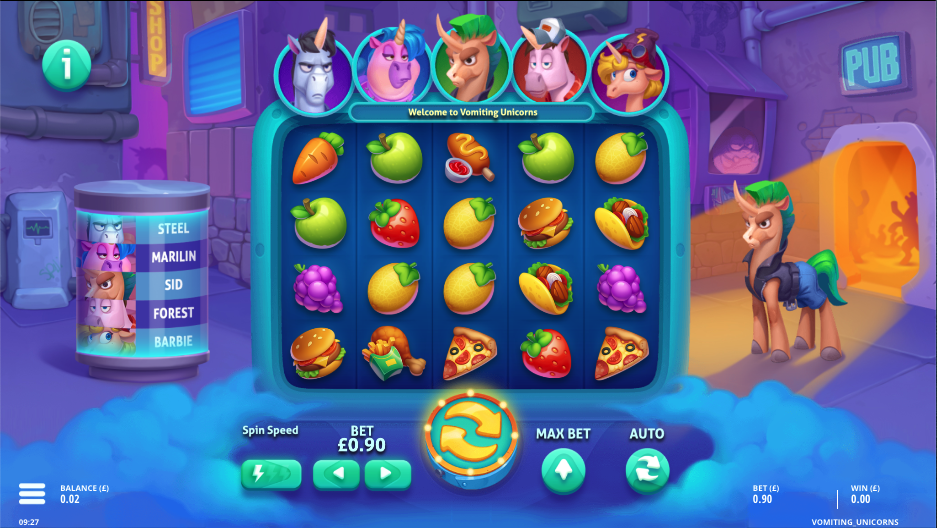 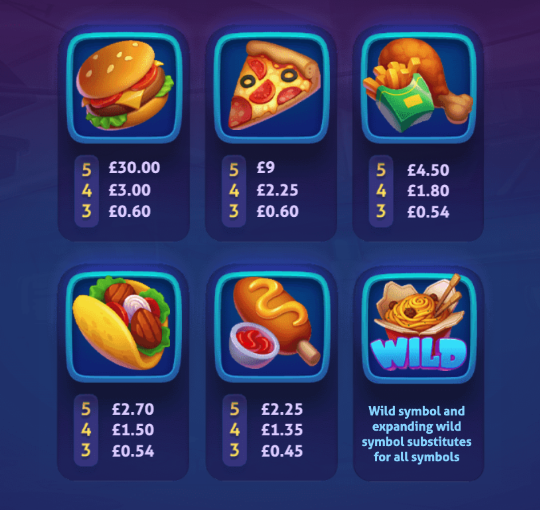 Picture the scene – a bunch of unicorns have been drinking heavily all evening and one by one they lurch out to the backdoor of the pub to create a beer-flavoured pavement pizza; these are the Vomiting Unicorns and the anti-heroes of this online slot machine from Gluck Games which comes with a clever wild feature and some jackpot prizes.

Vomiting Unicorns is a five reel slot with four rows and thirty fixed paylines; the setting for those reels is the dimly-lit back street behind the pub in which we can see the unicorn merriment continuing unabated. Our five heroes – Steel, Marlin, Sid, Forest and Barbie – are shown above the reels and also on the big bin on the left hand side.

The higher value symbols are all examples of junk food such as burgers, pizza slices, fried chicken, kebabs and hot dogs; the lower values are somewhat healthier – apples, grapes, strawberries, oranges and carrots.

A box of Chinese food is the wild and it will replace all symbols to help form winning combinations.

On each spin at least one of the unicorns above the reels will dream of a type of junk food and if that particular food lands on that reel then is will turn completely wild; matching more than one dream will turn multiple reels wild for bigger wins.

The biggest prize awaits those who can turn all reels wild in the same spin because this triggers the Jackpot Feature in which a spin is awarded with any wins multiplied by between 250x and 10000x.

The enjoyment of Vomiting Unicorns lies in the colourful graphics and distinctly adult storyline in play; the bonus features are well thought out and if you’re lucky they may reward you with enough cash to enjoy your own wild night out.