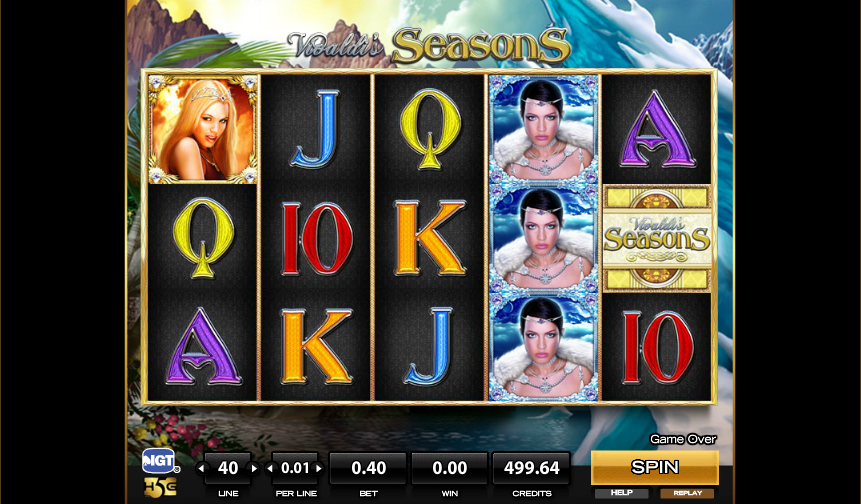 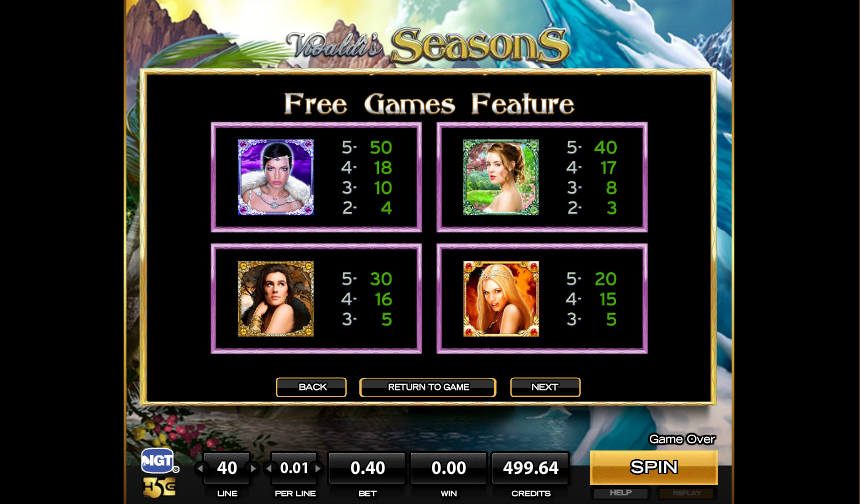 Every now and again a welcome sliver of high culture elbows it’s way into the casino industry and that’s what we’ve got here; Vivaldi’s Seasons is an online slot from IGT based on The Four Seasons violin concertos by Antonio Vivaldi’s. Written around 1720 each concerto is influenced by a particular season and in this game each is represented by a different girl. Read the full review below for more information.

Vivaldi’s Seasons is a five reel slot with three rows and up to forty paylines; it’s a recognisably basic IGT design and behind the gold-framed reels there’s a little of each season visible in each corner.

As we said earlier each season is represented by a girl and it’s clear from that particular icon which season it’s supposed to be; for example winter sports some thick white fur while autumn features some leafless trees. 10, J, Q, K and A make up the lower values.

The Vivaldi’s Seasons logo is wild  and substitutes for all other symbols except the Free Games scatter which appears only on reels two, three and four.

Before each spin any one of the symbols can be randomly selected to be stacked for the next spin. This means that it’s possible to fill all reels with matching symbols if you’re lucky – except the Free Games icon which is only on the centre three reels.

This is triggered by landing the Free Games scatter symbol on all positions on the centre three reels; this means that the scatter must have been chosen in the Super Stacks feature before that spins.

You will now receive seven free spins and with the Super Stacks feature still active and now the wild symbols will substitute for all other symbols. It’s not possible to re-trigger any more spins from within this round.

Vivaldi’s Seasons is an odd slot – it’s a bit difficult to get excited about the features for some reason but it all looks very nice. It seems to be a low variance game with lots of small wins when the stacks line up and it has an RTP of 94.90%.