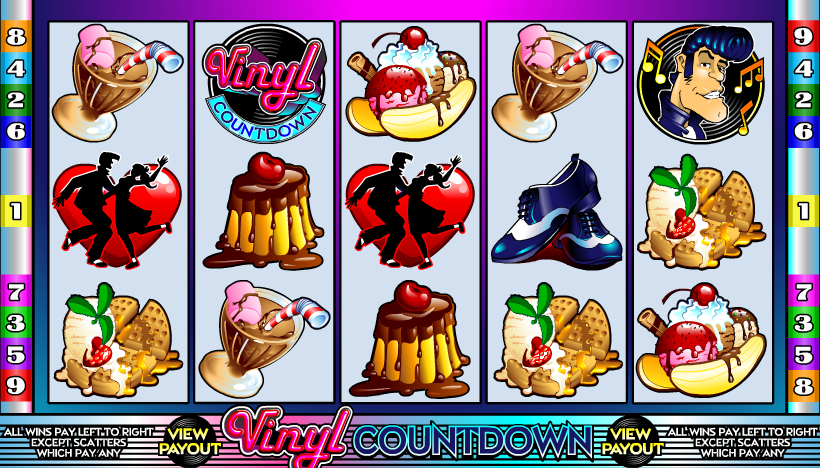 The 1950s was an era of huge social progression, especially in the United States and many reminders of that time still pervade our modern culture. Anyone who has seen movies such as Grease or American Graffiti will know what we are referring to and many of us, even outside the US, will have visited a traditional 1950s-style diner at some point.

Vinyl Countdown is an online slot from Microgaming which is based on one of those classic eateries and more specifically on the iconic jukebox which stood in the corner of every establishment. This is a game without bonus features but with a certain timeless charm which will appeal to many players so read on to find out how to play it.

Vinyl Countdown is a five reel slot with just nine paylines and it’s one of Microgaming’s older-style games in which the reels and symbols completely fill the screen area. It’s those symbols which are immediately attractive about this release and they include a variety of tasty-looking desserts, a pair of stylish shoes, a couple dancing in front of a giant heart, a square jawed and be-quiffed youth and a slightly-too-young-looking girl. The biggest prize in the base game is won by landing five of the Vinyl Countdown logos for 1000x your line stake.

The scatter symbol is a sparkling glitter ball which can pay out for you even if the symbols do not appear on an active payline – more than three in view anywhere on the reels will win you a prize. The wild symbol is the jukebox itself and will substitute or any other symbol to make a winning combination with the exception of the scatter.

Well of course this game is a little dated now but it’s worn quite well and the theme should be enough to persuade you to check it out, however briefly. The sound effects are the nicely crafted noises of a busy restaurant so don’t touch that mute button.