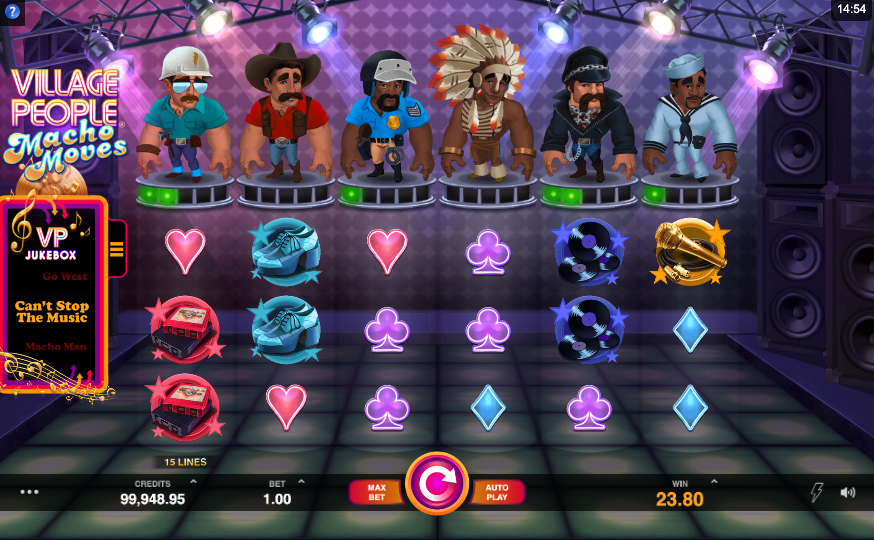 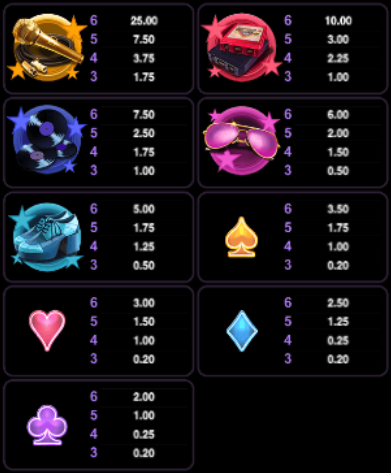 The Village People were the disco sensations of the 1970s with songs such as YMCA and In The Navy persuading partygoers onto the dancefloor to this day; it’s about time then that they have an online slot themed on their careers and it’s here in the shape of Village People Macho Moves, a release from Microgaming with a multitude of wild features.

Village People Macho Moves is a six reel slot with three rows and fifteen fixed paylines; select your favourite tune from the jukebox on the left hand side and watch the spotlit reels spin as above each of the reels one of the band members stands, waiting for their meter to be filled.

The high value symbols include a microphone, some eight track cassettes, some vinyl records, a pair of sunglasses and some platform shoes; playing card symbols in yellow, pink, blue and purple make up the lower values.

The wild symbols are the basic wild and the VP Wild (which we’ll talk about shortly) – both will substitute for all others symbols to help form winning combinations.

Whenever a VP Wild symbol lands it will expand to fill positions on its reel and it will also fill up one of the segments under the band member directly above – when that meter is full you’ll receive five free spins with an enhancement related to that reel:

Any slot with Village People tunes playing in the background has to be good and we are happy to say that this game is no disappointment – play for long enough and watch those meters fill up for some big wins in the free spins.