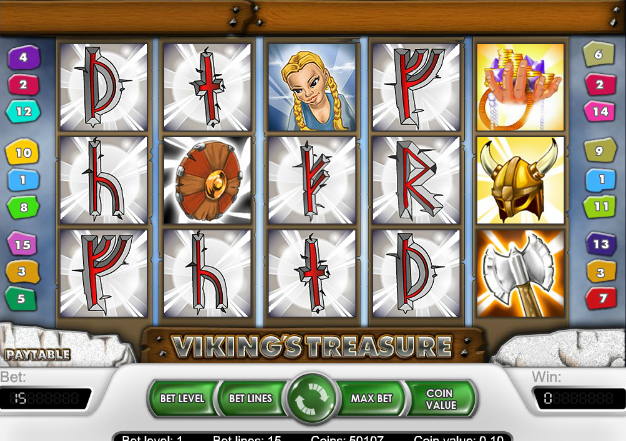 After several centuries of overseas exploration, daring sea voyages, raids and colonisation, the Vikings would surely have been delighted to know that they were remembered in an online slot machine based on their adventures.  Viking’s Treasure is a Net Entertainment release which takes us back more than 1000 years to a time when our Scandinavian friends roamed around the northern hemisphere.

Viking’s Treasure features just fifteen paylines spread over five reels and it’s all set against a hazy gold background.  The sound effects give the impression of the creaks of a sailing vessel and there’s a real cartoon style to the symbols – the lower values are represented by a variety of runes but the higher value ones include a two-headed axe, a blonde-haired girl, a shield, a horned helmet and Viking longship.

The wild symbol is a fierce-looking Viking and there’s a handful of gold and jewels which triggers the bonus feature.

There’s just the one bonus round in this slot and it’s some good old free spins; fifteen are available and they’re triggered by landing three or more of the scatter symbols anywhere on the reels.  You’ll also get the prize for a winning combo of course.

The free spins will start automatically and each win will be subject to a 3 multiplier which always helps to boost your account.

The options for user interrelation are fairly limited here; you can change the number of paylines or your bet level but that’s about it.  Low rollers might appreciate the chance to play with tiny stakes and still win the free spins with the scatter symbol but you’ll win proportionately more money with more paylines.

This is a fairly basic slot and it’s fair to say that Net Entertainment have produced more creative slots than this but it’s still quite good fun.  It remains popular at the online casinos where it’s featured so it’s worth a go.