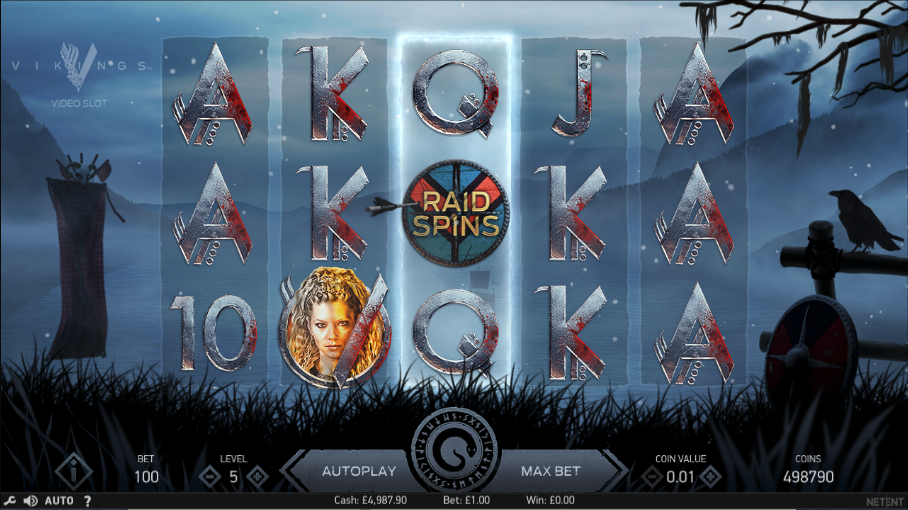 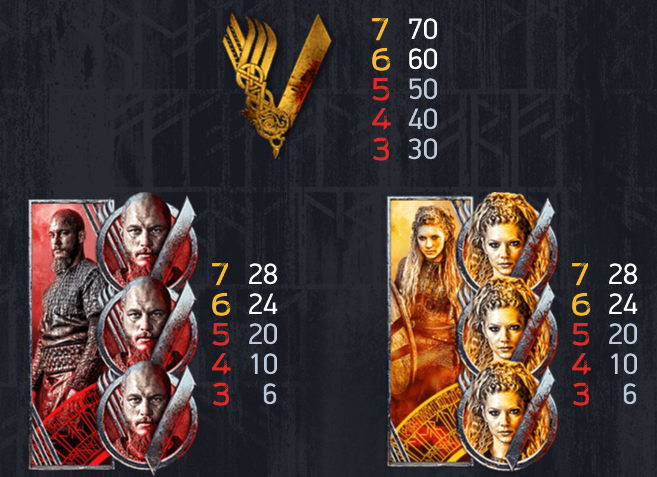 Based on the popular TV series, Vikings is an online slot from Net Entertainment which follows the adventures of Ragnar Lodbrok, a Norse hero who marauded around Europe and who may or may not have existed in real life; anyway this game is a belter and you can find out how it works below.

Vikings is a five reel slot with three rows and 243 paylines; through those opaque reels there’s a view of a chilly Scandinavian fjord with snowflakes falling gently and a foreboding crow squatting on the right hand side.

The five high value symbols are a large ‘V’ and characters from the show including Ragnar, Lagertha, Floki and Rollo (we think) along with blood-spattered 10, J, Q, K and A representing the lower values. The character symbols can appear stacked on the reels.

There’s no wild symbol in Vikings but there’s a bonus symbol in the form of the Raid Spins icon.

Reel three is a ‘hotspot’ in the base game and if a stacked Viking character fills up that reel then all others in view change into that particular character; this symbol will now be paid as a scatter and filling the screen with matching characters will pay out a massive 200000x your stake.

The Shield Wall can appear randomly in the base game and free spins and when it moves off it will leave behind matching symbols.

This is triggered by landing three of the Raid Spins bonus symbols anywhere on reels three, four and five for which you will receive seven free spins.

These Raid Spins take place on a seven reel, five row set with 78,125 paylines for your pleasure and now there are three hotspots on reels three, four and five. Again, any Viking character filling those reels will transform all others and pay out as scatter symbols.

Vikings is an action-packed and atmospheric slot which blends the tone of the TV show onto the reels very effectively with some acceptable levels of blood and an appropriate soundtrack; the features hit regularly and there’s an RTP of 96.05%.