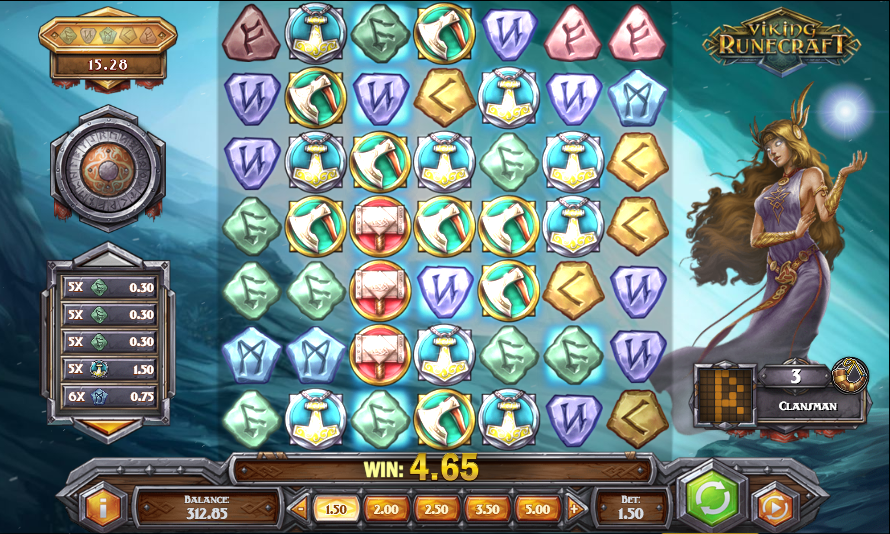 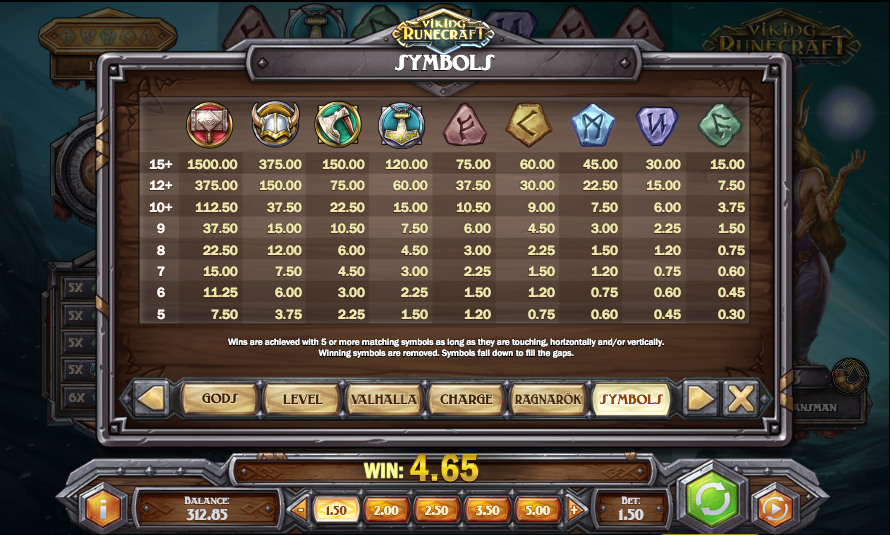 Play N Go do a very nice line in these arcade games which combine some exciting online slots action with plenty of high quality animations and bonus features; this one’s called Viking Runecraft (check out Cloud Quest, another favourite) and you can read all about it below.

Viking Runecraft is played on a 7×7 grid through which we can see a harsh Nordic landscape of bare mountainsides and chilly weather; a fearsome-looking Viking stands guard on the right hand side of the gameplay area. In this game winning combos consist of at least five symbols connected horizontally or vertically.

There are nine base game symbols and these consist of some Viking gear – hammer, helmet, axe and pendant – along with five runes of various colours. Our amateurish attempts at translation suggest these mean wealth (brown), ulcer (yellow), man (blue), ‘one of the gods’ (green) and then a purple one of which we are unsure.

Behind the grid you will see that there is a pattern lit up in blue and each time you create winning combo which covers one of these positions it will change to yellow. When the entire pattern is yellow the levelling up procedure will take place.

A different god will appear and award a random feature during gameplay:

When a pattern is cleared you will also get to play the Runes of Valhalla bonus game; this is a Wheel of Fortune game which will win you the cash prize in the top left hand corner of the screen if you land on a rune. That cash prize is incremented during gameplay by completing winning combos containing each of the five runes.

The meter to the left of the reels is filled by forming winning combos with a total of at least twenty symbols in a single spin; you will now be awarded one of the following four features:

When the feature ends the meter resets itself.

During this round the meter displays multipliers and as you collect winning combo symbols on each spin, the multiplier value for that win is increased up to a maximum of 15x.

Viking Runecraft is a brilliant slot which we can thoroughly recommend as a way to spend some of your game-playing time; there’s always something happening, it looks great and there are some big wins to be had in any of the bonus features. It comes with an RTP of 96.70%.