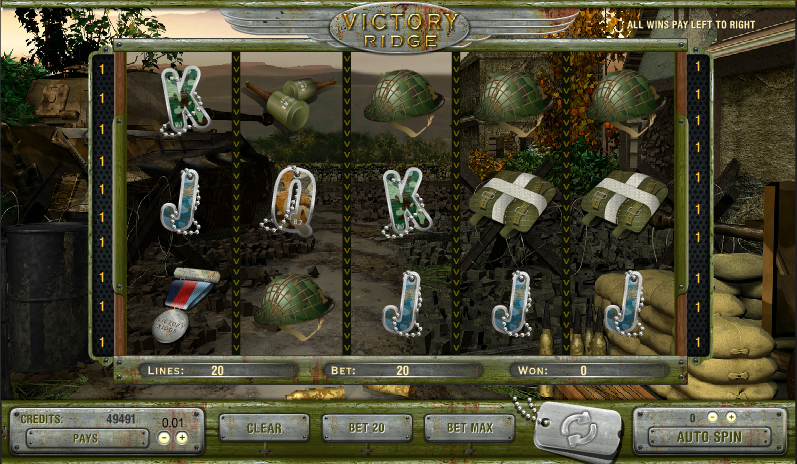 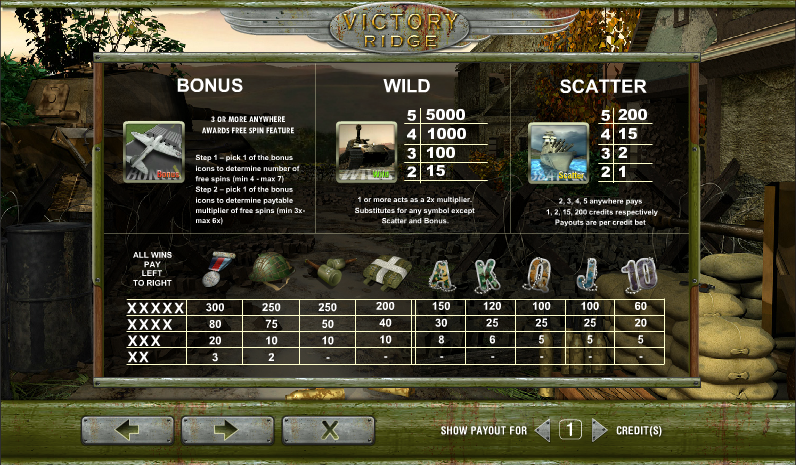 There aren’t too many online slots themed on war – it’s not a particularly cheery subject but we’ve played one or two in the past which have made a decent job of it. Victory Ridge is one more to add to the list, it’s now listed as an Amaya Gaming release but was originally developed by Chartwell before their acquisition.

Victory Ridge plays out over five reels and twenty fixed paylines  and the theme here is the Second World War. Through the transparent reels we can see a damp and grey scene complete with barbed wire, sand bags and an armoured vehicle on the left hand side.

The main symbols are a first aid kit, a hand grenade, a helmet and a medal; lower values are five dog tags shaped into the 10, J, Q, K and A..

The bonus symbols is an aeroplane on a runway, the tank is wild and there’s a gunship which represents the scatter.

The main feature in Victory Ridge is a free spins round and you can trigger it by landing three or more of the aeroplane scatter symbols anywhere on the reels. You must now complete the following before the spins start:

The spins will now start and if you are lucky enough to land three or more scatters during this round, you will receive the same number of spins again at the same multiplier level.

Chartwell have made a few stinkers in their time but this is one of the higher quality ones; the animations are classy when the bonus is triggered, the surrounding graphics are good and even the sound effects are Ok. Worth checking out.