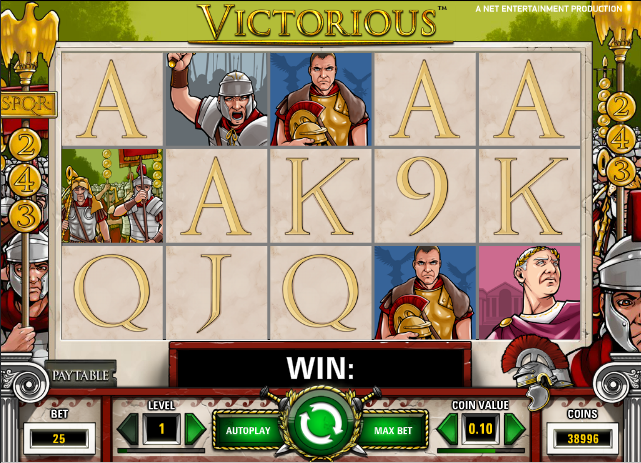 Amongst a proliferation of online slots based on ancient empires, Net Entertainment’s Victorious is the first we’ve reviewed with a Roman theme.  We’ve played games about Vikings and Egyptians but this is a foray back to Roman times.

Victorious is a five reel and 243 payline game and the reels are set against a backdrop of a marching Roman army.  The basic symbols are represented by playing cards but there’s a very Roman feel to their design which brings to mind temple engravings.  Higher value symbols are a marching army, a sword-waving soldier, a higher ranked soldier (perhaps a Centurion) and the Emperor.  A golden wreath is the scatter symbol while the golden eagle is the wild.

The big bonus game is the free spins round and you can win this by landing three of the wreath scatter symbols on subsequent reels starting from the left hand side.  Three, four or five wreaths will win you fifteen, twenty or twenty five spins respectively and all your wins will be multiplied by three.

This feature is Net Entertainment‘s’s proprietary payline mechanism and it essentially does away with the standard twenty or twenty five lines we normally see.  When playing you are able to win as long as you have matching symbols (or wilds) on adjacent reels; there’s nothing symmetrical about it and it probably doesn’t mean you win any more cash but it’s an innovative feature nonetheless.

The 243 is held up on either side of the reels on the same banner as the SPQR sign which history buffs will know roughly translates as The Senate and the Roman People.

This is a fairly simple slot from Net Entertainment and Net Ent fans will know that later games are much more graphically impressive; still, it’s a decent time waster and it adds to the selection of slots featuring ancient civilisations.