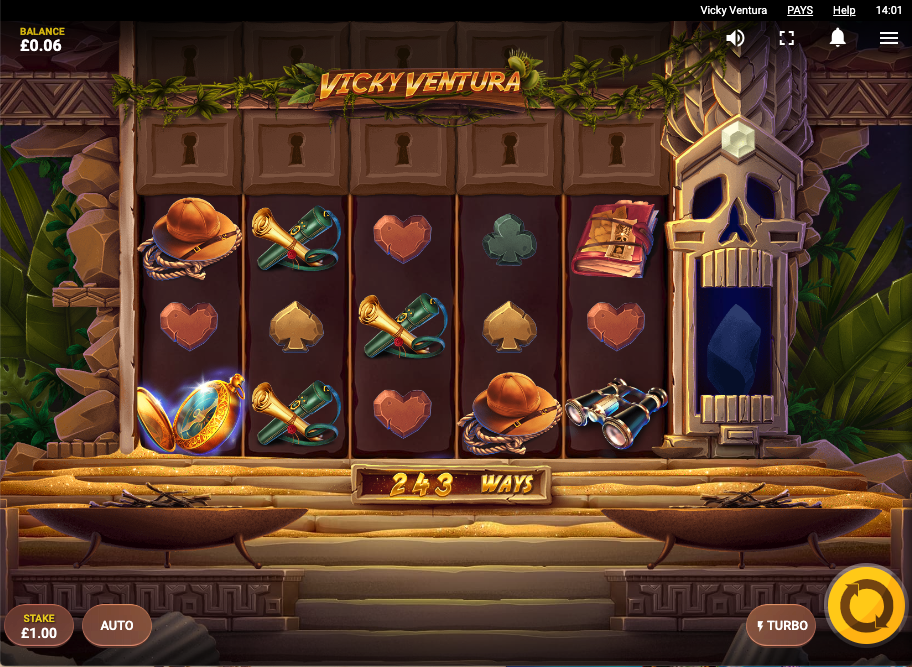 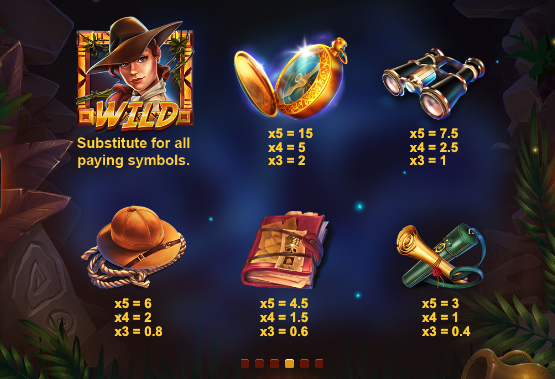 As online slots fans we’re familiar with those intrepid jungle adventurers who lend their name to the spinning reels and here we have one more to join the club; Vicky Ventura is her name and her story is told by Red Tiger Gaming who are tempting us with powerful Totem Crystals and free spins.

Vicky Ventura is a five reel slot with three rows and 243 ways to win; those reels spin at the top of a set of sandy steps with undergrowth in the background and a mask statue on the right hand side which will prove useful during the game. There’s a locked row above the reels which become important during the features.

The higher value symbols a gold compass, a pair of binoculars, her hat, her diary and what could be a treasure map; playing card symbols represent the lower values.

Vicky herself is wild and she will replace all standard symbols to help form winning combinations; the Totem Crystal and the Free Spins symbols are the key to the bonus features.

Each time a Totem Crystal lands on the reels it will beam a ray of light into the mask statue on the right; the statue will then return the light to the unlocked positions (the normal reels) or the locked positions above.

If the ray hits a locked position it will turn wild while an unlocked position will turn into a matching symbols to help out with wins. More Totem Crystals can also be created to prolong the fun. Unlocking the upper row will increase the number of paylines available.

This is triggered by landing three of the Free Spins scatter symbols anywhere in view for which you’ll receive an initial ten free spins; two extra locked rows will now appear but retriggering this round will add another to bring the total to four and a massive 16,807 paylines. You’ll still need the Crystal Totems to unlock those positions but once they’re unlocked they stay that way until the round is over, however they’ll only be wild for the initial spin, changing to a random symbol after that.

Red Tiger slots seem to be getting better and better and Vicky Ventura is one of our favourites so far – the features are clever, the cartoonish graphics are great and the sound effects add to the jungle atmosphere.