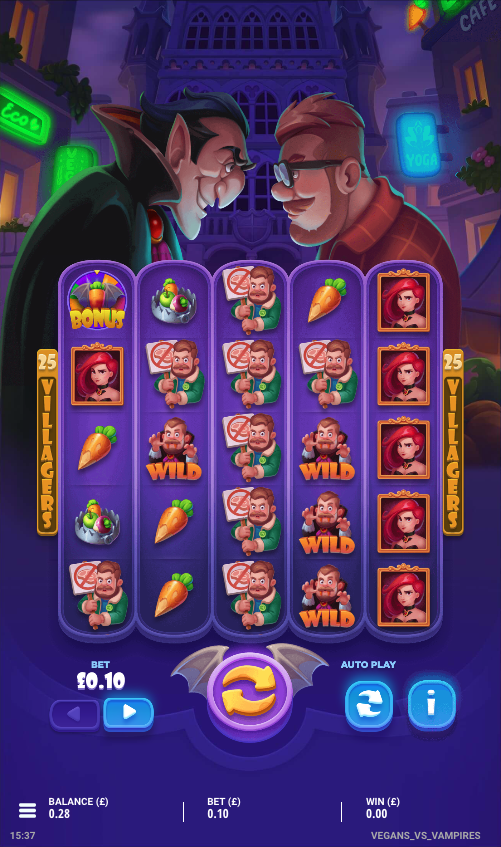 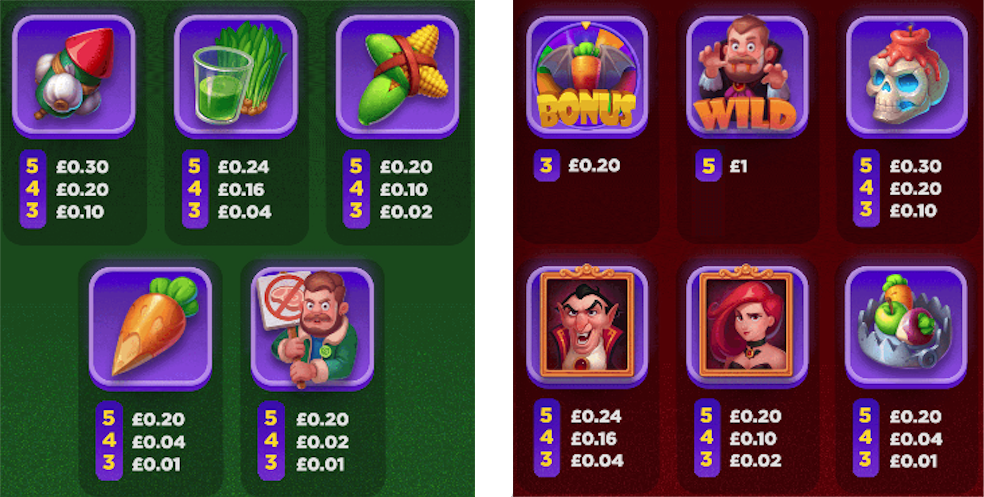 At last, it’s the battle we’ve all been waiting for – Vegans vs Vampires – and it’s going to take place on the reels of an online slot machine developed by Gamevy; from £0.10 per spin it tempts players with expanding reels, Vegan free spins and the Vampire Tower feature.

Vegans vs Vampires is a five reel slot with five rows initially and twenty five paylines; the cartoon-style graphics sees our protagonists face off above the reels, surrounded by all the hallmarks of a gentrified city area.

Theme-related symbols include the skull candle holder, the male and female vampires, the man-trap, the garlic firework, the kale smoothie, the carrot stake, the sweetcorn cross and the protesting Vegan. A different vampire is wild and the carrot with bat wings is the scatter.

A the beginning of any spin the reels can expand from five rows to six or seven, increasing the number of paylines to 35 and 45 respectively. They’ll drop down again as they rise.

Trigger this by landing three of the winged carrot bonus symbols anywhere on reels one, three and five and the wheel will now spin to reveal an one of the following prizes:

Vampire Tower – a four-level picking round in which you must find prizes to work your way up the tower; the biggest prizes are waiting on the top floor.

Vegan Free Spins – awards ten free spins with one standard symbol picked at random to expand whenever it appears. These symbols don’t need to be on adjacent reels to payout.

Vegans vs Vampires is clearly designed for a mobile device but it can be played on other devices if you can overlook the playing area and size; it’s an entertaining slot for sure but there’s a ‘retro’ feeling about it that we can’t quite place. It’s not hugely creative but it’s good enough for a few spins for sure.