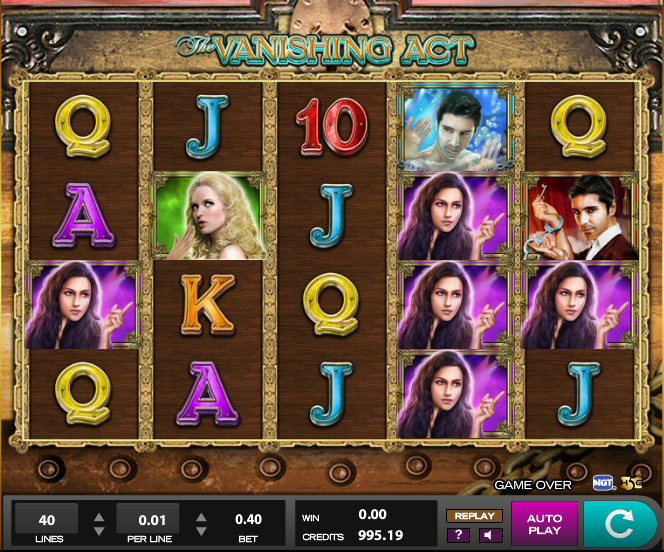 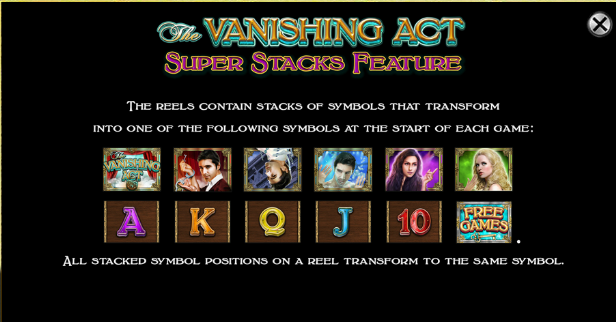 Escapology is one of the more dangerous stage activities a magician can perform – or at least that’s the way it looks to the audience who feel as though they could be watching someone about to die. The Vanishing Act is an online slot based on this trickery and misdirection, it’s developed by IGT and it comes with two separate bonus features – read all about it below.

The Vanishing Act is a five reel slot with four rows and up to forty paylines; those reels spin on the side of a locked box, the kind from which the illusionist may be trying to escape.

There are five high value symbols including our escapologist in various states of peril (handcuffed, upside down in chains and under water) and two glamourous assistants. 10, J, Q, K and A represent the lower values.

The Vanishing Act logo is wild and will replace all others to help with a winning combo except the ‘Free Games’ scatter symbol which is obviously the key to the main feature.

This occurs in the base game and the free spins round and before each spin one of the symbols (including the wild and scatter) will be selected to be stacked on the reels, offering the hope of some bigger wins.

The Free Games scatter symbol appears only on reels two three and four and if you can fill all of those reels with this icon you will receive seven free spins. This means you can only trigger the free spins when the scatter is selected as the stacked symbol.

Unfortunately you can’t retrigger any more spins from within this round.

The Vanishing Act is perhaps a little bit run-of-the-mill but the theme adds something to the genre and it’s not as hard to trigger the free spins as one might imagine. The RTP is 94.90%.