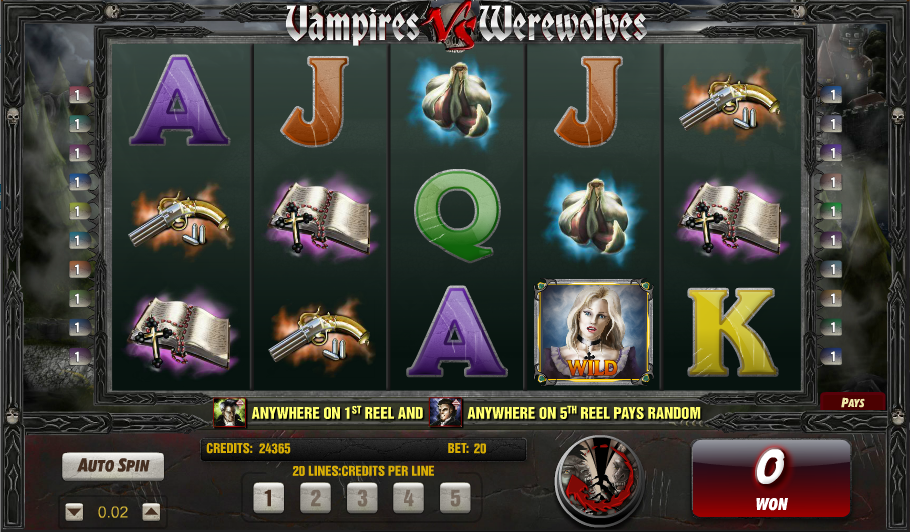 Very few things are made worse by the addition of vampires and we’ve reviewed a number of online slots in the past where that has proved to be the case. This Amaya Gaming release not only has vampires but it also features werewolves and due to a certain film franchise, these two are now mortal enemies.

Vampires vs Werewolves is a five reel and twenty payline game with a dark and brooding atmosphere; gloomy mountains and gargoyles occupy the background and all the symbols are set against dark grey.

Aside from the standard J, Q, K and A symbols we have some nicely drawn theme-related items which include a pistol, a cross and bible, a bloodied dagger and a clove of garlic.

The wild is a female vampire, the bonus symbol is a vampire and a werewolf facing off against each other and there are two smartly dressed, pre-transformation gentlemen who are the scatters and activate one more feature.

If you can land the vampire scatter on reel one and the werewolf scatter on reel five you will trigger this mini-bonus. You will be rewarded with a random payout but this can increase if there are any symbols elsewhere on the screen continuing the small cross. If you are betting five credits per line, there’s a maximum payout here of 11000x your line stake.

Vampires vs Werewolves Board Game

This is the main feature and is triggered by landing three of the vampire/werewolf symbols on reels two, three and four. You will now be taken to a screen and asked to choose which character you want to play – vampire of werewolf. Now the screen changes into a board and you must roll the dice to move along it, picking up prizes along the way.

A ‘stopper’ space will end your fun but if you happen to land on a ‘life saver’ space it will protect you once from the stopper. The further you get the more money you will win.

Keep the sound on for the full creepy effects of this game and you can play with as many or as few paylines as you like in the knowledge that you will have the same chance of triggering the feature – handy for low rollers.

This is a highly enjoyable game with plenty of creativity and some decent quality graphics and animations. We like the way the scatter symbols glow when there’s a potential for a win. We also particularly like the 98.00% RTP, one of the highest we’ve come across.