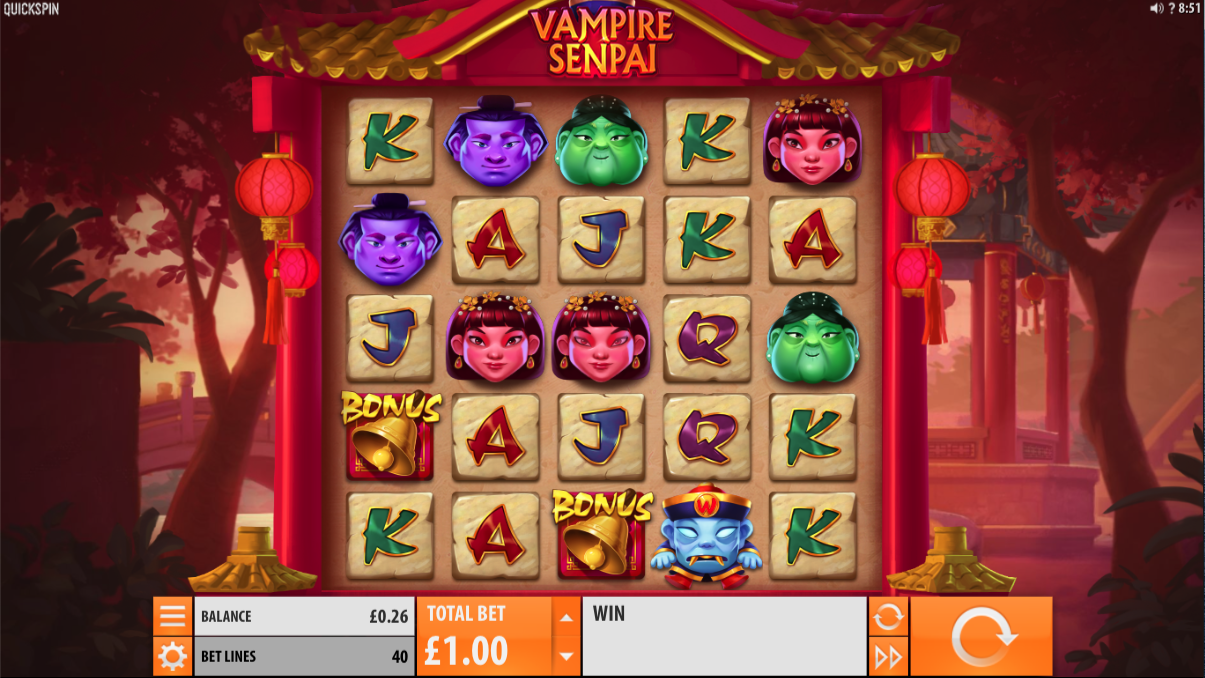 The combination of vampires and Japanese culture sounds like an interesting one and in Vampire Senpai we can see the results of this clash – this is an online slot from Quickspin which offers players several clever bonus features and stakes from £0.10 to £50.00 per spin.

Vampire Senpai is a five reel slot with five rows and forty fixed paylines; red, paper lanterns sway on the sides of the temple structure which holds those reels and in the background there’s a hazy red vision of Japanese calmness.

The three higher value symbols are the characters from this story with with pink, green and purple faces; J, Q, K and A represent the lower values. The little blue vampire is wild and he comes with a bonus feature described below; the special symbols are the talisman wild and the bonus bell.

The blue vampire is a bit more than just a wild and whenever he lands any of the character symbols next to him will turn wild also – any characters next to them will also turn wild and so on.

Talisman Wilds only appear randomly on the reels and when they do between three and nine will appear on reels one to four, hopefully helping out with some wins.

Landing three, four or five of the golden bell bonus symbols anywhere in view will award 7, 9 or 12 free spins respectively; any vampire wild landing during this round will stay on the reels, hopping around with each spin and activating the Turing Wild feature. Talisman Wilds can also land and will lock in place. Each of the above symbols will also add an extra spin when they appear.

Vampire Senpai brings together the style and serenity of Japan with the bloodsucking ability of cute vampires and the end result is a very enjoyable slot with lots of chances to win and some engaging gameplay.