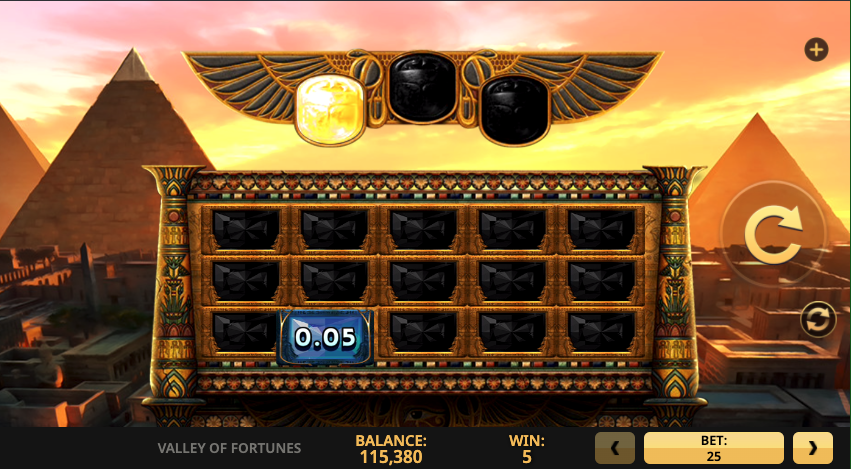 If you’re looking for something a little different from the usual spinning reels then why not try out this interesting online slot from High 5 Games – it’s called Valley of Fortunes and it’s Egyptian theme promises some novel gameplay combined with a tasty bonus feature.

Valley of Fortunes is a five reel slot with three rows but no set paylines – instead wins are achieved each time one of the three coloured blocks with a value attached falls on to the reels; all other symbol positions will be blanks. There’s an epic view of the pyramids of Ancient Egypt behind those reels which are flanked by hieroglyph-covered columns.

The coloured blocks are worth the following multiples of your stake:

This is triggered by landing at least three coloured blocks on any spin and the feature will be marked by the three spaces above filling up with gold blocks. The reels will now increase in height to eight rows and the blank blocks will disappear, letting the coloured ones fall to the bottom. A new set of symbols will drop in, all blanks will disappear and any new coloured blocks will drop as far as they can.

The round ends when all positions are filled with coloured blocks or there’s a drop in which no new ones land; if it’s the latter then there’s a chance that another drop will be awarded to try and continue the process.

Valley of Fortunes is interesting in that the gameplay is simple and complex at the same time; it’s clever stuff and potentially lucrative also if you get lucky with the Racking Up Riches feature