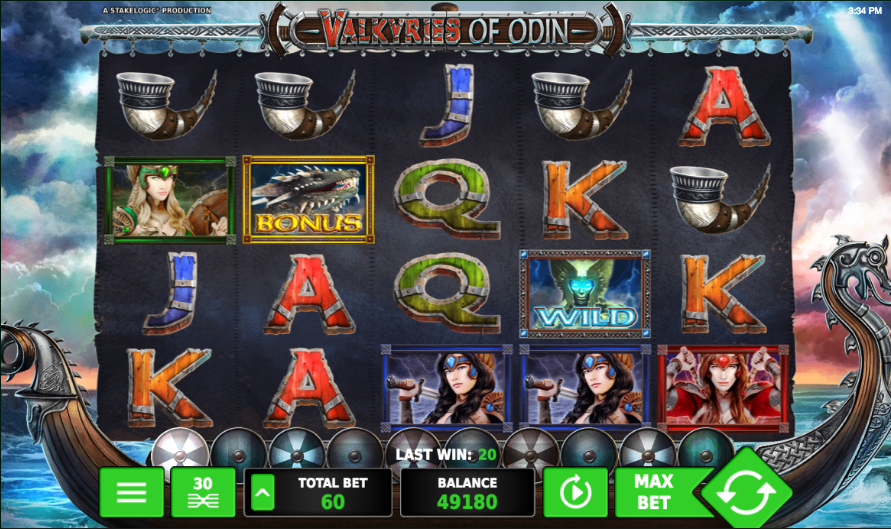 Scandinavian legends are always rich seams of inspiration for online slots developers and here we have one more game themed on that subject; it’s called Valkyries of Odin, it’s developed by Novomatic subsidiary Stakelogic and it’s eponymous characters are those mythical female warriors who select which fallen soldiers will be joining Odin in Valhalla.

Valkyries of Odin is a five reel slot with four rows and thirty fixed paylines; those reels spin on the black sails of a Viking longboat which sits on choppy seas under gloomy, threatening clouds.

There are six high value symbols and these include three Valkyrie (red, blue and green), a helmet/axe, a sword/shield and a horn; J, Q, K and A make up the lower values.

The Mecha Valkyrie is wild and it will substitute for all others to help form winning combinations except for the game’s logo and the dragon bonus icon.

This is triggered by landing three, four or five of the dragon bonus symbols anywhere in view for which you will receive ten, twenty of thirty free spins respectively. During this feature wins will pay from right to left as well as left to right to increase winnings.

Beneath the reels you will see ten shield positions and each time a Valkyries of Odin symbol lands, one of those positions will be filled. When all positions are filled you’ll receive ten free spins on a different set of reels.

In this feature there are Mecha Valkyrie wilds three positions tall on reels two, three and four and if any part of them is visible they will nudge up or down to fill all positions on that reel, giving you plenty of wild wins as you can see from the video above.

Valkyries of Odin is a designed to a very high standard with lots of creativity and thought; we always like a feature which is guaranteed to trigger if you play for long enough but in fact it doesn’t take that long at all. Give this game a try – it comes with an RTP of 96.04%.