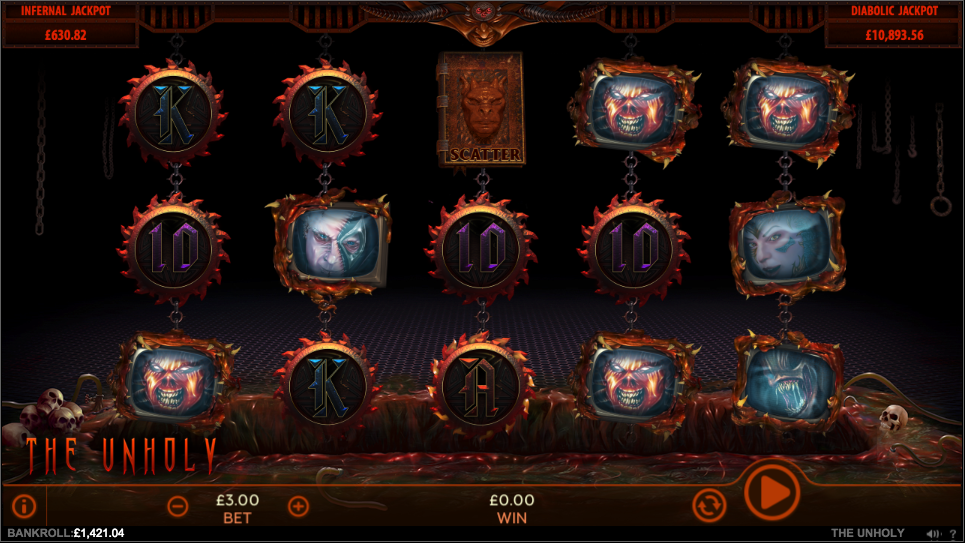 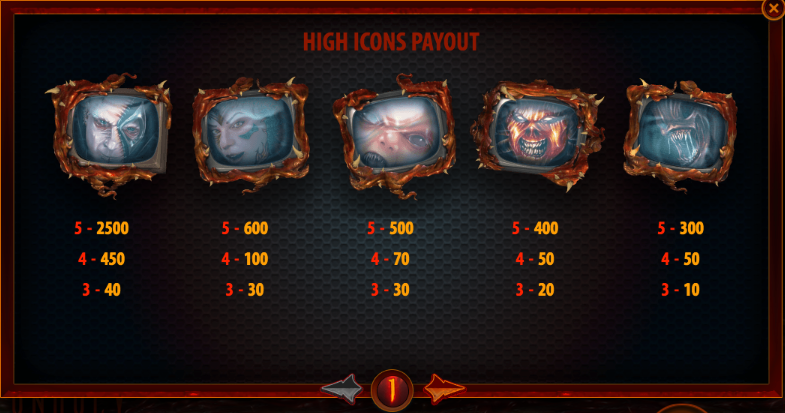 Online slots themed on the underworld are quite a rare occurrence but they’re always welcome if designed in an appropriately scary way; The Unholy is a game from Random Logic which ticks the boxes – it’s full of unpleasant faces and piles of skulls as well as three bonus features and a couple of progressive jackpots.

The Unholy is a five reel slot with three rows and thirty fixed paylines; the symbols are contained within small spiky frames and they float against a backdrop of heaps of skulls and blood.

The five higher value symbols are all scary faces of varying creepiness and they are accompanied by 10, J, Q, K and A as the lower values.

The wild symbol is a razor-toothed skull which will replace all others to help form winning combos except for the bonus and scatter icons. On reel three it will expand to fill all positions if a win is possible.

This is triggered by landing three, four or five of the book scatter symbols anywhere in view for which you will receive 8, 15 or 25 free spins respectively. There are no extra features to this round but more spins can be won by landing at least three more scattered books.

Trigger this by landing three of the skeletal bonus symbols anywhere on reels two, three and four and you’ll get to play a four stage picking round; collect multipliers as you progress and these will be totalled and applied to your total stake at the end.

If you can land the wild symbol on reels one and five in the same spin you’ll play a brief picking game in which a multiplier will be awarded and applied to the total bet.

The Infernal Jackpot and the Diabolic Jackpot are randomly awarded but you’ll have a better chance with a bigger stake.

The Unholy certainly has some of the most disturbing graphics we’ve seen in a slot machine but the creepy pics and the atmospheric sound effects combine to create an engaging experience. It comes with an RTP of 96.19%.