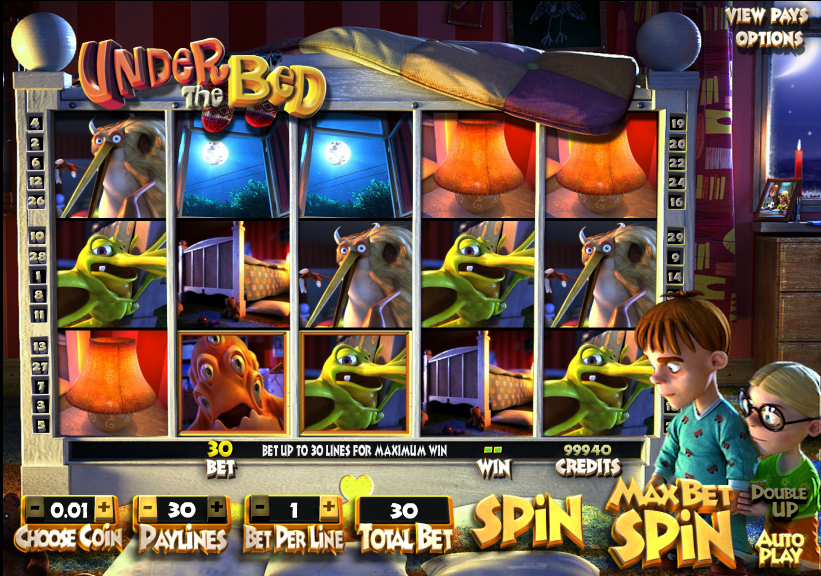 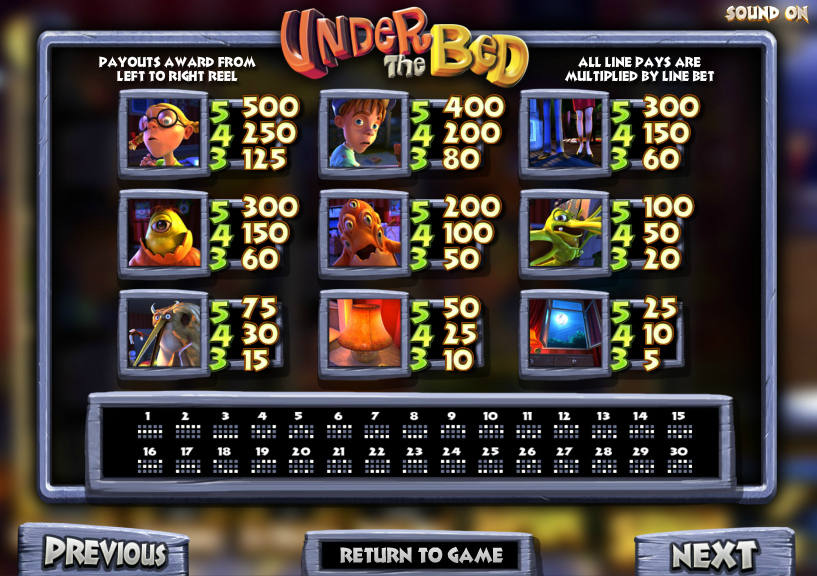 If the Pixar movie studios ever made online slots than we have to assume it would look something like Under the Bed. It’s actually developed by Betsoft but the graphics, the theme and the animations all look like the work of the award-winning movie studio. The theme here is the scary creatures that lie under our beds (and in our imaginations) and there are several bonus feature to enjoy.

Under The Bed is a five reel slot with three rows and up to thirty paylines; the game looks amazing with some top notch graphics on show and two scared but well-animated children to the right of the reels. Even the background music has a movie-like quality.

All the symbols are them-related and include the two kids, the parents’ legs, four different monsters, an orange lamp and an open window.

The wild symbol is a green ‘Wild’ which only appears as part of a feature; there are two bonus symbols, the bed and the door which activate separate features.

Some of the symbols are gold-rimmed when they land on the reels and if you make a winning combination including one of these the Sticky Wild feature is triggered.

One of the symbols will flip round to reveal a wild symbol and a number (up to five) of spin it will remain in place for.

This is triggered by landing three or more of the bed bonus symbols anywhere in view after which you must play a card picking game. Pick cards to reveal monsters for prizes until you hit the ‘Collect’ card.

Trigger the free spins by landing the door symbol in the centre of reel three during normal gameplay. Twelve free spins will now be yours indicated by a hand dragging you towards the screen. All wins have a 2x multiplier.

Each win can be gambled by using the ‘Double Up’ button below the reels. You now get to visit a dice-throwing monster and all you have to do is guess whether the next roll will result in an odd or even number. Get it wrong and the game is over.

Under The Bed looks absolutely fantastic and clearly a lot of though and effort has gone into the design and implementation. There are plenty of bonus features to keep players interested and plenty of small wins to keep your bankroll ticking over.