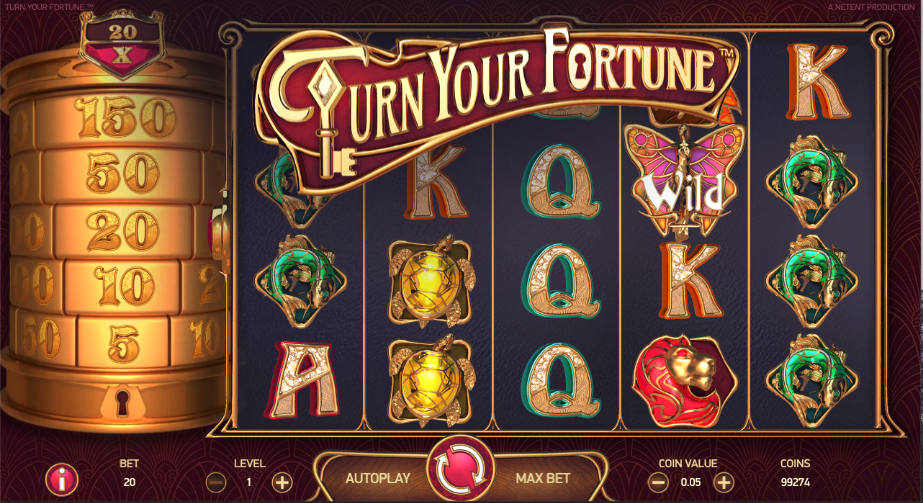 Themes for some online slots can be a little tricky to nail down sometimes and here we have one involving metallic animals, keys and what looks like a Buddhist prayer wheel to help you out; it’s called Turn Your Fortune, it’s developed by Net Entertainment and it offers players a clever free spins round.

Turn Your Fortune is a five reel slot with four rows and forty fixed paylines; to the left of those gold-rimmed reels the large wheel stands with various values on its different levels. A dramatic soundtrack cranks up the tension as you press the ‘Spin’ Button.

Stylised metallic animals are the higher value symbols and these comprise the lion’s head, the owl, the turtle, the fish and the snail; J, Q, K and A are the lower values.

The butterfly is wild and it will substitute for all others to help form winning combos except for the peacock scatter symbol.

This is triggered by landing three of the peacock scatter symbols anywhere on reels one, three and five and a three level Wheel of Fortune will now spin to determine the number of spins (7 to 13), a chosen symbol and perhaps a key which will start the Fortune Wins wheel on a higher level.

When the spins begin all instances of the chosen symbol are totalled in the meter to the left and when that’s full the multiplier value on the wheel moves up one level; a key on reel five will do the same thing and a ‘+10’ symbol on reel two will fill up ten positions on the meter.

Trigger this by landing two scatter symbols anywhere in view along with a line win on the same spin; the symbols in that combo now lock in place and you’ll get a respin in which only that symbol and keys appear on the reels – all further matching symbols will also lock. Those symbols will fill up a meter on the left  and each five spaces filled will move the win level up by one. The round is over when no more symbols or keys land or when you’ve collected twenty and filled the meter.

Landing three scatter symbols and a win on the same spin will trigger both the Free Spins and the Fortune Respins.

Turn Your Fortune is another high quality offering from Net Entertainment with a really clever free spins round, some top notch graphics and a soundtrack which keeps the excitement levels high – check it out!