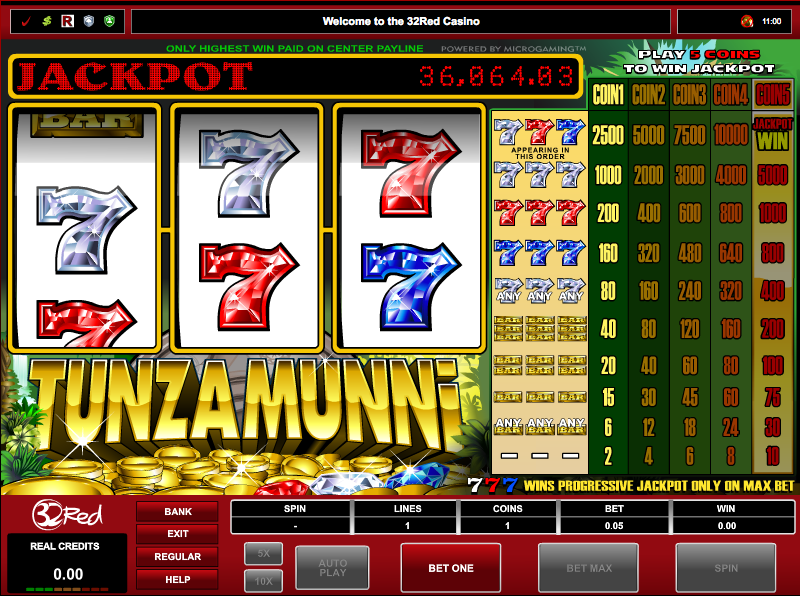 Is Tunzamunni a pun or just play on words? We don’t really know and it’s too early in the day to think too much about it; however we do know that translated into the Queen’s English it would result in ‘Tons Of Money’ – certainly an accurate description if you are lucky enough to win the progressive jackpot on show here. Tunzamunni is a Microgaming slot with no bonus features but five different coin levels so read on to find out more.

Tunzamunni is a three reel slot with two rows and just one payline. Piles of gold coins and jewels litter the area beneath the reels in an attempt to persuade you that riches await the luckiest players.

To the right of the reels is the paytable which contains all the payout information you need to know and a list of all the symbols. In fact there aren’t all that many symbols – there are single, double and triple gold bars along with silver. blue and red sevens. The gold bars shine and the sevens sparkle – polished to within an inch of their lives to project that aspirational feeling.

There are not traditional bonus features included in Tunzamunni but there is of course the tasty carrot of a progressive jackpot to tempt curious players.

The jackpot total can be seen slowly increasing above the reels and the way to win it is to land three sevens on the payline in the following order – silver, red and blue.

However you must also be playing at the highest coin level (five) but fear not, that makes the maximum stake a mere £0.25 so it won’t damage your bankroll unduly.

Tunzamunni is clearly a basic and slightly dated slot but it does offer the chance to win a large jackpot prize for a relatively low stake. The RTP of 90.04 is rather low.