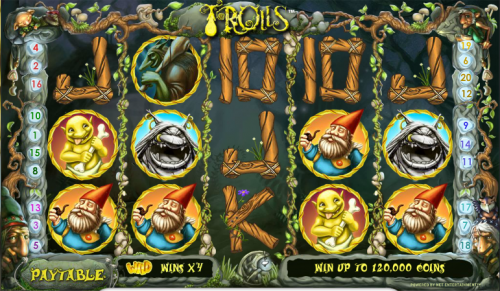 Trolls are the fictional characters of children’s nightmares; originating from Norse  mythology we now see these creatures living in caves or loitering under bridges waiting for unsuspecting goats to cross.  Net Entertainment have used this legend to create an online slot which features some great graphics and animations and a profitable free spins round.

Trolls is a five reel and twenty payline slot in which the trolls look like a remarkably cheerful lot; smiling male and female trolls frame the reels which are held in place by rocks, twisted roots and Celtic patterns.  You can even spot small trolls hiding in the gnarled roots.

Basic playing cards represent the lower value symbols but they’re crafted out of logs tied together with plants.  The higher value symbols are a range of trollish characters and so we have one with a red hat, a baby with a bone, a stone troll, a troll in the gloom, a troll with a basket of mushrooms and one wearing a crown.

Special symbols are a basic wild and a golden wild; the scatter symbol is a full moon in the night sky.

If you can create a winning combination using the wild symbol in standard gameplay it will be worth 2x the prize.

The golden wild only appears on reel three and if it helps to form a winning line then it will multiply the reward by an impressive 4x.

We all like a free spins round and that’s what you’ll get if you can land three, four or five of the  full moon scatter symbols.  You’ll get ten, twenty or thirty spins respectively and all prizes you win while playing are subject to a 3x multiplier which isn’t bad at all.

Trolls is really well designed and constructed online slot from a company that knows what it’s doing.  With the exception of the golden wild there’s nothing particularly ground-breaking here but it’s a playable slot nonetheless with woodland sound effects.