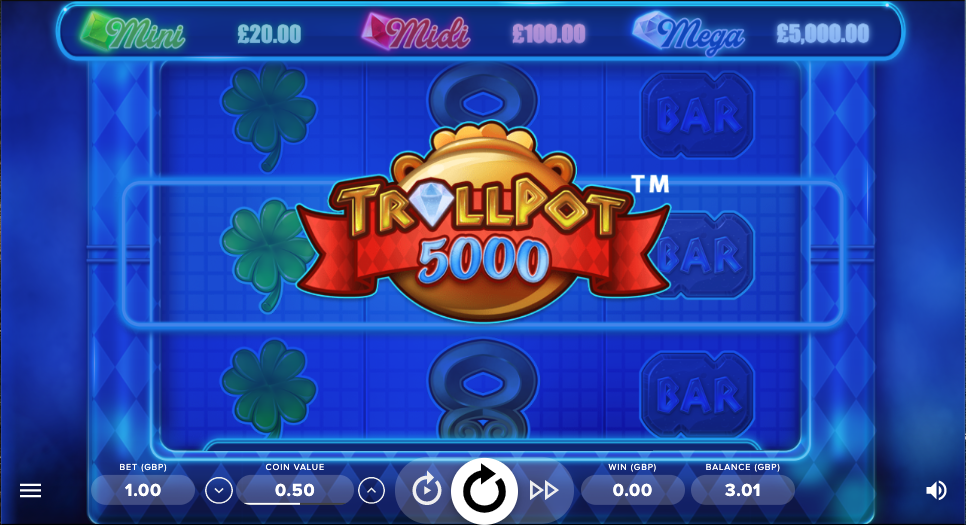 Sometimes it’s best to disregard the latest feature-laden online slot machine, take a step back and try out something like Trollpot 5000 – this release from Net Entertainment comes with the bare minimum of reels and paylines but still manages to squeeze in some jackpot prizes and old-fashioned nudges.

Trollpot 5000 is a three reel slot with three rows and just the single payline; the design could be described as ‘glowing blue’ with the various jackpot prizes shown just out of reach above the fast-moving reels.

There are six familiar symbols in use here and they are the chequered red seven. the gold star, the golden twisted shape, the pair of mushrooms, the four leaf clover and the Bar. Blank symbols can also land but they are no worth anything.

The joker is the wild and it can appear anywhere on the reels – it will replace all symbols except for the jackpot and the ‘up’ arrow to help form winning combinations. More than one wild involved in a win will also apply a multiplier of 2x, 4x and then 8x for the luckier players.

This is triggered every time you land a winning combination and to start with if the symbol above the winning one on reel matches it, it will nudge down onto the payline and create another win; this will keep happening until there are no more matching symbols on that reel. The action now switches to reel two and then three where the same process occurs.

Lucky players may also encounter an ‘up’ arrow (the blue gem) during the nudging and if this moves onto the payline the symbols will start moving in reverse, repeating all the wins which have already been earned.

When all the nudging has finished in that particular feature, if there are three jackpot symbols at the top of the reels then you’ll win the smallest one on show. Ideally there’ll be three Mega Jackpot symbols for a prize of 5000x your stake but if the lowest value symbol is a Mini or Midi you’ll earn 20x or 200x the stake respectively.

There might be just one payline but there aren’t many symbols either so wins are create a bit more often than you might think – this means that the Nudge Feature is triggered quite regularly and what’s not to like about that? Chuck in some jackpot prizes and you have an enjoyable slots outing.