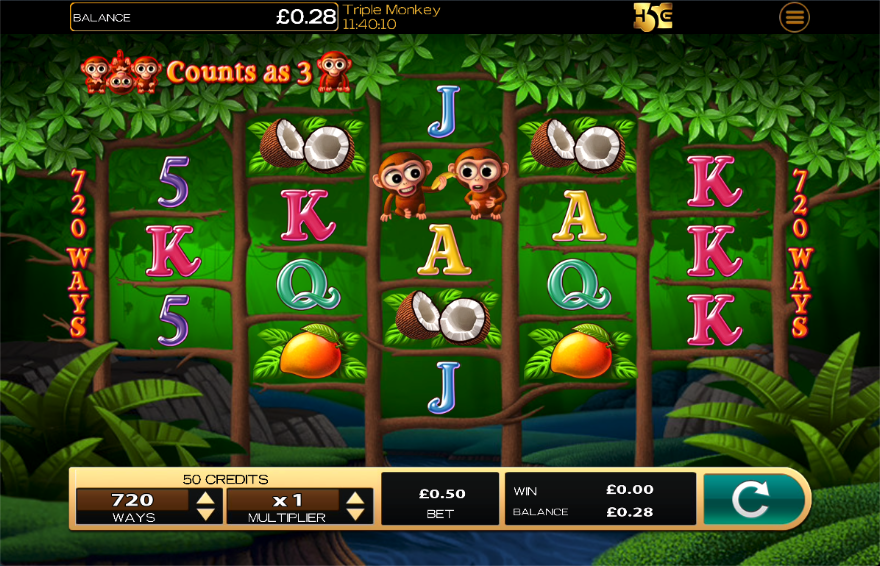 Is there anything better than single or double monkeys? Well according to High 5 Games the Triple Monkey may just have the numerical edge – this is a jungle-themed online slot with a variety of bonus features and the potential for a fifteen symbol win.

Triple Monkey is a five reel slot with variable rows and 720 ways to win; those reels are formed from intertwined branches on which the symbols sit and through the gaps there’s a view of dense forest.

The high value symbols include the monkey, the coconut and the orange; lower values are 5, J, Q, K and A. Up to three monkeys can appear on one reel position with a potential 2500x prize for fifteen on an active payline.

The fish is wild, it appears on reels two to five and will substitute for all others to help from winning combos except for the various bonus symbols. It will always be worth three monkeys on one reel position.

This is triggered by landing three of the Free Games scatter symbols anywhere on reels two, three and four; you’ll receive six free spins but three more can be won by landing three scatters again.

Trigger this by landing three of the Find Your Fortune scatter symbols anywhere on reels two, three and four; pick one of the coloured bananas on display and you’ll play a picking round with prize values based on that particular banana.

This is triggered by landing at least three of the red/gold scatter symbols anywhere in view to win the following:

The only reason not to like this charming slot is a dislike of animated monkeys and there can’t be many players with that outlook; Triple Monkey offers some quality animation along with three bonus features that should satisfy most gamers.