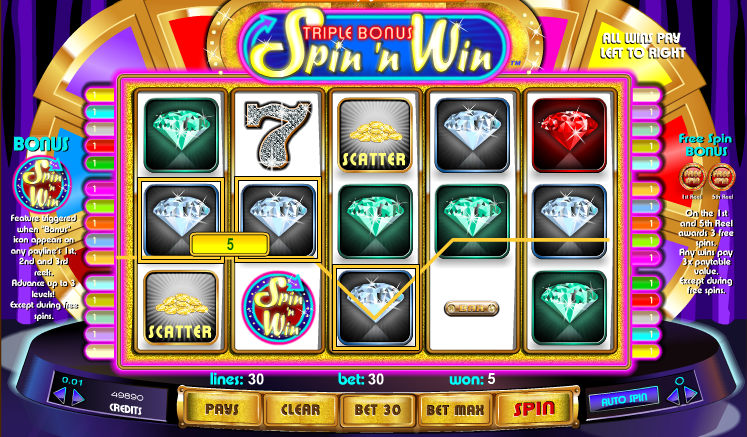 Triple Bonus Spin ‘N Win is something like a classic Vegas-style slot crossed with a television game show; it’s also got five reels which marks it out from the more usual three reel versions you might find in a bricks and mortar casino. This slot was developed by a company called Chartwell which was acquired by the Canadian Amaya Gaming in 2011.

Triple Bonus features five reels and thirty paylines and it’s certainly a neat-looking game with some stylish graphics.  Everything is very polished and sparkly and the background to the reels is reminiscent of television game shows such as Wheel of Fortune.

The symbols are a range of traditional slot icons but buffed up within an inch of their lives; there are white, green and red diamonds, yellow, blue and red ‘Bar’ icons, a ‘7 Bar’ symbol and big, diamond encrusted Seven to finish things off.  The Bell is wild, there are gold and silver piles of money scatter symbols, a Free Spin chip symbol and a Spin ‘N Win symbol.

This slot includes a couple of minor bonus features and this is one of them; land the Free Spin chip on reels one and five and you’ll receive three free spins.  You will also get a 3x multiplier applied to any wins you manage during this feature.

This is where the game show influence makes itself visible and to activate this bonus you’ll have to land three of the Spin ‘N Win symbols on an active payline on reels one, two and three.

You’ll now be taken to a Wheel of Fortune game and here you must pick one of the four arrows on the outer edge.  The wheel will spin and if that arrow lands on a number you will win that coin amount; if it lands on a star you will progress to the next wheel which is worth five times as much.  Repeat the process again and a star will again take you to another wheel, worth five times as much again.

We’ve not much to offer as far as this slot goes – the paylines are fixed and there’s very little scope to change anything.  Just play it and have fun!

The two bonus features lift this just above the average online slot and it’s worth a few minutes of your time; the ambient sound feature on the menu is a nice touch and it provides casino sounds rather then background music when you’re playing.