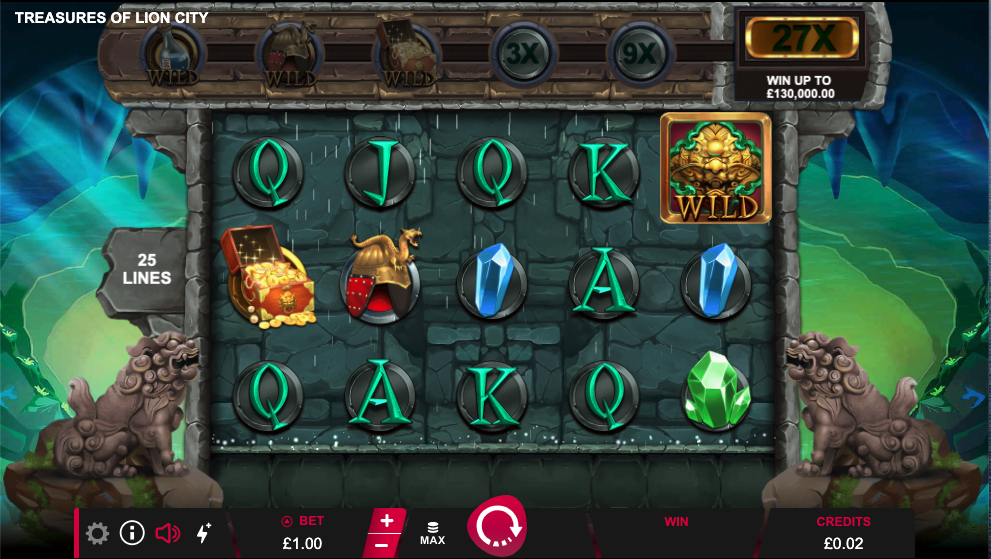 There are still places on our planet Earth which are remnants of ancient civilisations yet to be rediscovered and Treasures of Lion City is an online slot machine which takes is to one of those locations; it’s developed by Microgaming/Pulse 8 Studios and it its Rolling Reels feature promises large multiplier wins.

Treasures of Lion City is a five reel slot with three rows and twenty five fixed paylines; all the action takes place in some sunken world where light streams in from the surface to light up the treasures waiting below.

The five high value symbols here include a chest of sparkling coins, an ornate golden helmet, a vial of blue potion and crystals in blue and green; J, Q, K and A represent the lower values.

The stylised golden mask is wild and it will substitute for all other symbols to help create winning combinations.

This is where all the fun happens and the essence of Rolling Reels is that any symbols in a winning combo will disappear and be replaced by more falling from above; in Treasures of Lion City you’ll earn extra features as the Rolling Reels continue as follows:

When there are no more wins the total win is calculated and awarded.

Treasures of Lion City may lack the standard free spins but who cares when the Rolling Reels feature works as well as it does here – it kicks in regularly and can rack up some big wins once those symbols start turning wild!