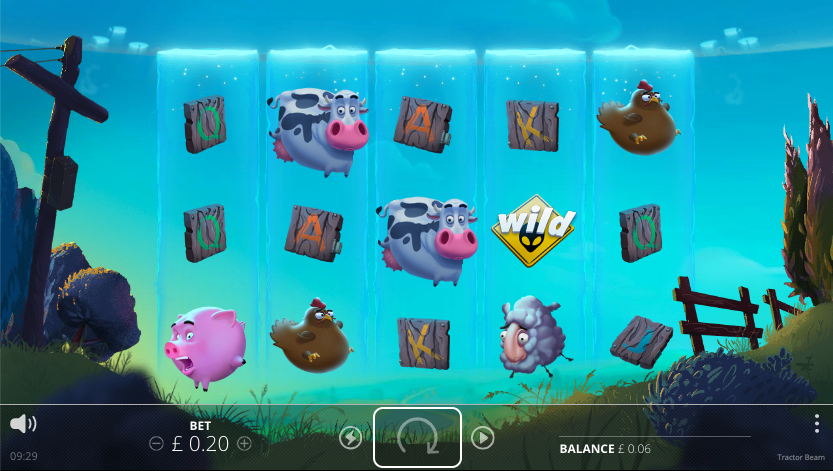 Farm animals have long been under threat from alien invaders trying to steal them for various nefarious purposes and in Tractor Beam, this online slot from Nolimit City, that narrative continues while offering players some science fiction-themed bonus features and free spins.

Tractor Beam is a five reel slot with three rows and twenty fixed paylines; each reel is a tractor beam in which the worried animals and other symbols float and spin in their battle to avoid alien abduction. The backdrop is the rural farm to which these animals belong.

The four high value symbols are the cow, pig, sheep and chicken while the lower values are bits of wood painted with J, Q, K and A.

The wild is an alien warning sign which will substitute for all other standard symbols to help form winning combinations; the blazing ‘S’ is the scatter symbol.

The following two features can occur on any spin:

This is triggered by landing three, four or five of the ‘S’ scatter symbols anywhere in view for which you will receive 7, 9 or 12 free spins respectively. When the spins start each symbol in a winning combo (except the wild) will be removed from the reels until the round ends.

Any scatter symbol which land will award one extra free spin and then be removed from the reels.

Tractor Beam is another clever, high quality slot from Nolimit City and we particularly like the variation and creativity in the free spins round; amusing graphics, sci-fi sound effects and a touch of humour combine to make a winner.