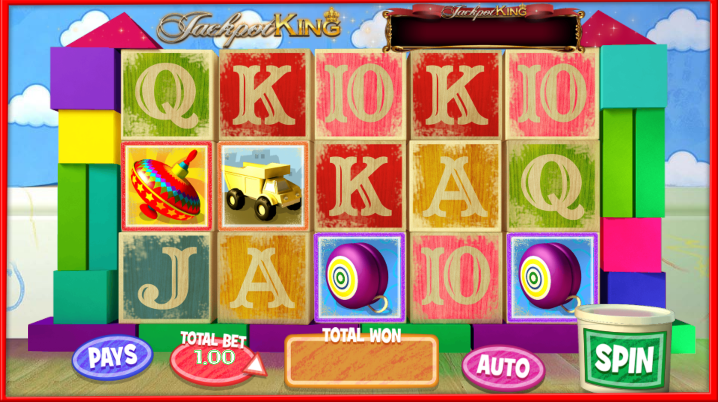 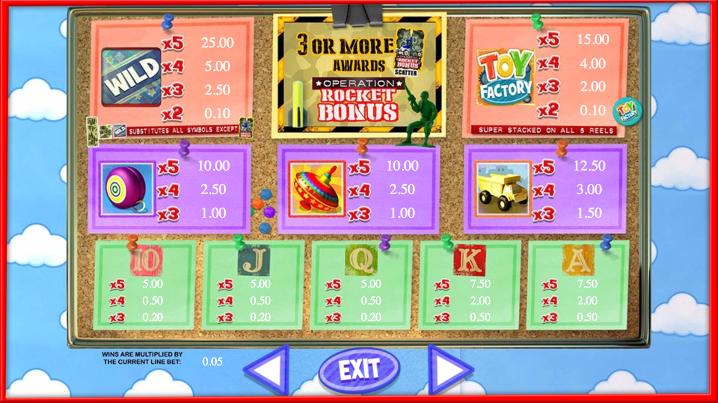 Some online slots seem to be designed with children in mind even though they are not the ones who are legally able to actually play the game. That’s the case with this colourful release from Blueprint Gaming which is based on those old-fashioned toys we might have used as kids. It’s called Toy Factory and you can read all about it below.

Toy Factory is a five reel slot with three rows and twenty fixed paylines; the symbols look like individual wooden blocks which form part of a larger blocky structure and there are some hand-drawn clouds on a blue sky in the background.

There are some nice toy-themed symbols including a yo-yo, a spinning top and a big yellow truck; the Toy Factory logo can appear stacked on all reels. 10, J, Q, K and A make up the lower values.

The wild is represented by a big ‘Wild’ and it will substitute for all others except the rocket launcher scatter.

This is triggered by landing three or more of the rocket launcher scatter symbols anywhere in view; as you can see from the video above a foam rocket will be launched into the air, open into a parachute and land on one of five bonus options:

Top Cat is part of Blueprint Gaming’s Jackpot King progressive jackpot series and the feature  is triggered by landing five jackpot symbols on the reels. You’ll then play a reel set where the aim is to collect crowns before the round ends – manage at least 15 and you’ll get to spin the wheel of fortune which could win you the progressive jackpot.

Toy Factory does a good job in reminding us of the toys we had when we were younger and it proves that adding a bit of nostalgia into a slot generally works. There are plenty of bonus features but a slightly low RTP of 92.50%.