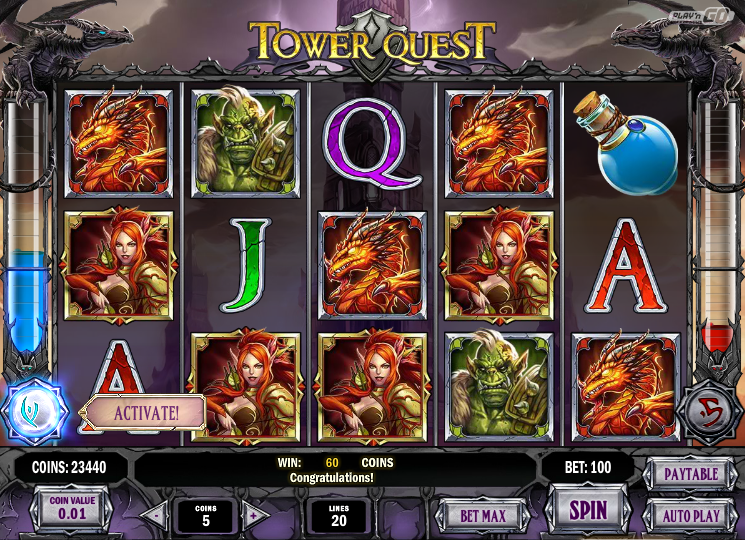 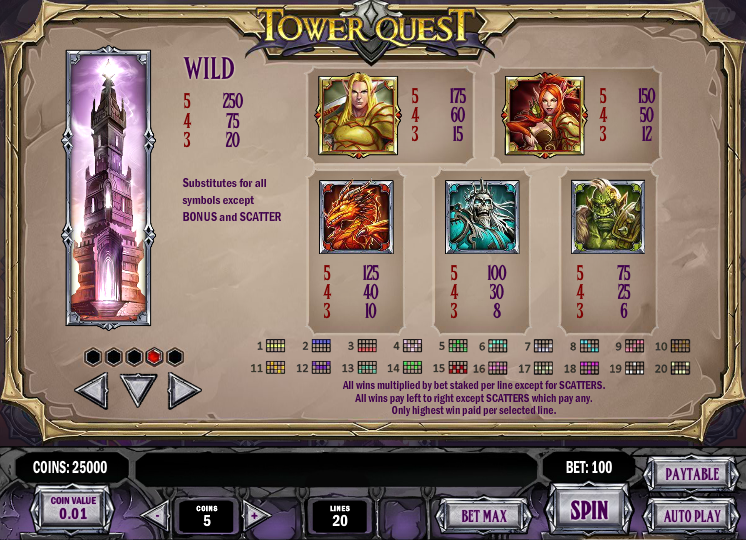 Tower Quest is a brand new online slot machine from Play N Go which is partly based on those fantasy card games in which characters and abilities face off against one another. There’s a distinct Dungeons and Dragons vibe to the whole game and as well as a creative bonus round, players have the opportunity to collect blue and red flasks which can be swapped for free spins.

Tower Quest is a five reel slot with three rows and twenty fixed paylines; it’s set in a gloomy world with dark skies and grim towers – dragons overlook proceedings from above the reels.

The high value symbols are a range of characters from this tale and include male and female heroes, a dragon, a glowing blue skeleton and a green goblin. J, Q, K and A represent the lower values.

The wild is represented by the tower and appears stacked on the reels, occupying all positions if you are lucky. The purple wizard and the red/blue flasks are all scatters which trigger extra features.

The evil wizard appears only on reels one, three and five and if you can land him there in one spin this feature is triggered. Roll the three dice to choose which set of cards to use and then you will see your set of three cards compared to the wizard’s. You will win prizes based on the comparison of the cards next to each other vertically.

Rolling  two or three of the same number during the initial roll will provide extra damage and attack values during the comparisons.

Either side of the reels are ladders which are gradually filled by landing red and blue flasks during the base game. When you reach certain amounts collected you can collect certain free spin features – the more you collect, the better the bonus:

It’s difficult to say which of the free spins features is the best so we recommend trying them all out so you can decide for yourself.

We tend to favour the type of games which offer guaranteed bonuses and that’s what we’ve got here with the free spins feature. The card bonus game is also something we’ve not seen before, making Tower Quest a game worth checking out. There’s an RTP of 96.24%.