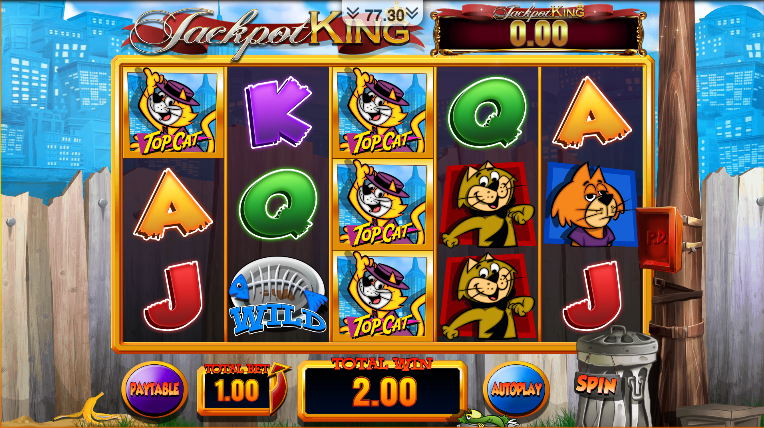 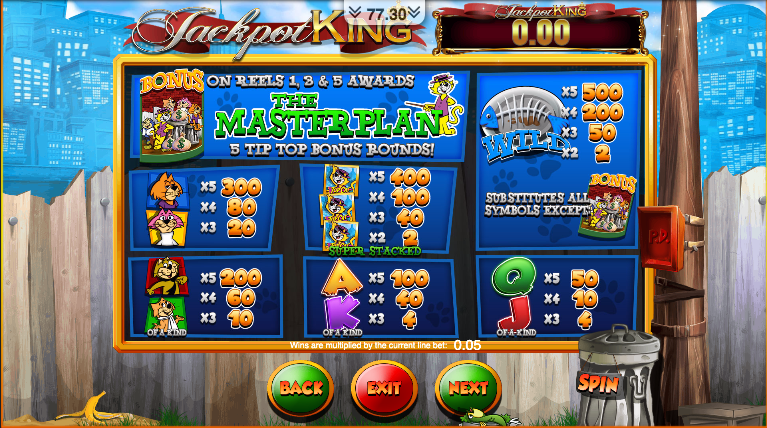 Those of us of a certain age will need no reminding of Top Cat – it was the cartoon we watched which starred a group of Manhattan alley cats attempting to outwit Officer Dibble. Fortunately there’s now an online slot dedicated to Top Cat and his crew, it’s developed by Blueprint Gaming and it includes lots of bonus features plus a progressive jackpot.

Top Cat is a five reel slot with three rows and twenty fixed paylines; the symbols spin in gold-framed reels against a backdrop of that very familiar alley with it’s dustbin and red phone box.

Five if the main characters represent the high value symbols so pick from Top Cat, Benny the Ball, Choo-Choo, Brain, Fancy-Fancy and Spook. Lower values are the standard J, Q, K and A.

The wild symbol is some fishbones on a plate and it will substitute for all others except the bonus symbol – that’s a group view of all the cats which appears only on reels on, three and five.

This is the main feature and it’s triggered by landing three of the bonus symbols anywhere on reels one, three and five and you will now be asked to pick one of the plans on the noticeboard which will reveal one of the following:

There are four brief bonuses which can be triggered randomly within the base game:

Trigger this by landing the giant hot dog wild on all positions on reel five; the wild will then be ‘fished’ across the reels one place/spin at a time until it falls off the left hand side.

Top Cat is part of Blueprint Gaming’s Jackpot King progressive jackpot series and the feature  is triggered by landing five jackpot symbols on the reels. You’ll then play a reel set where the aim is to collect crowns before the round ends – manage at least 15 and you’ll get to spin the wheel of fortune which could win you the progressive jackpot.

Top Cat offers a bewildering number of bonus features on top of a game which recreates the Hanna-Barbera cartoon extremely well. It’s all good fun and well worth checking out.