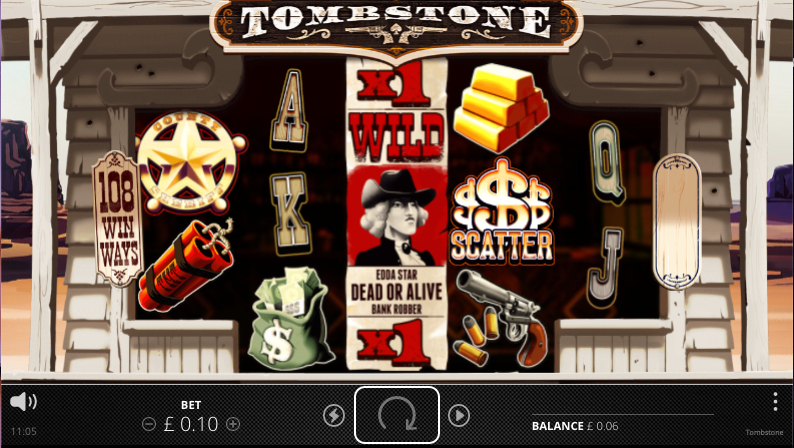 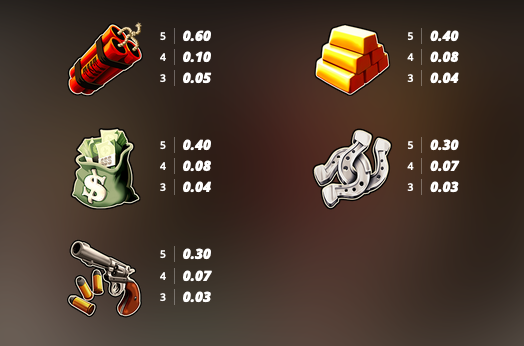 The Od West may have been a dangerous and unpredictable place but it’s provided us with the material for plenty of online slot machines over the years and now we have another courtesy of Nolimit City – it’s a game called Tombstone and it offers four different bonus features.

Tombstone is a five reel slot with variable rows and one hundred and eight fixed paylines; those reels are set out in a 2, 3, 3, 3, 2 formation and they spin on the front of a wooden building in the dusty town of the same name.

The theme-related symbols in Tombstone include some sticks of dynamite, gold bars, a bag of cash, a pair of silver horseshoes and a revolver; J, Q, K and A make up the lower values.

The wanted posters are the wild symbols and they appear on reels two, three and four; they’ll substitute for all other standard symbols and they are also stacked and will nudge fully into view whenever they land. For each nudge the multiplier for any wins will increase by 1x.

The three special symbols are the sheriff and marshal badges along with the dollar sign scatter.

This is triggered by landing three of the dollar sign scatter symbols anywhere in view and you’ll initially receive ten free spins; all nudged multipliers will remain in play for the the rest of the feature while one or two scatters during this round will award one or three extra spins respectively.

Trigger this by landing a sheriff badge on reel one and a marshall badge on reel five; you’ll receive three free spins with wild symbols locked in place.

This is triggered by landing the sheriff badge, the marshall badge and three scatter symbols to receive 12 free spins; this round awards the benefits of the Gunslinger and Justice Spins due to the difficulty of activating it.

There’s plenty to like about Tombstone, not least the cartoonish atmosphere and jaunty symbols but also of course the variety of features on offer and those nudging wilds – it’s good stuff!