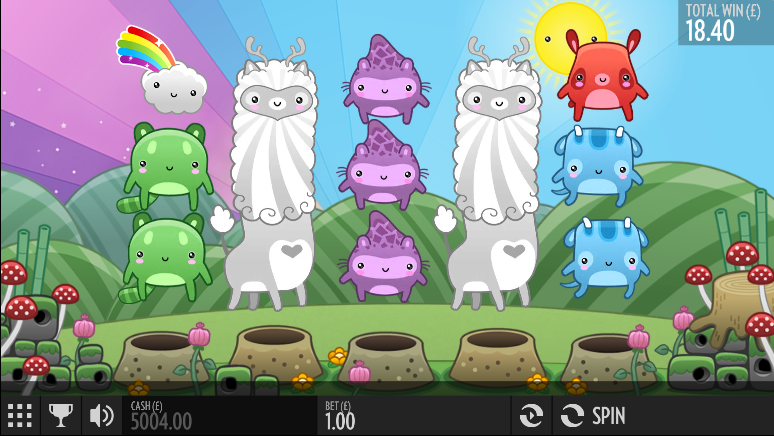 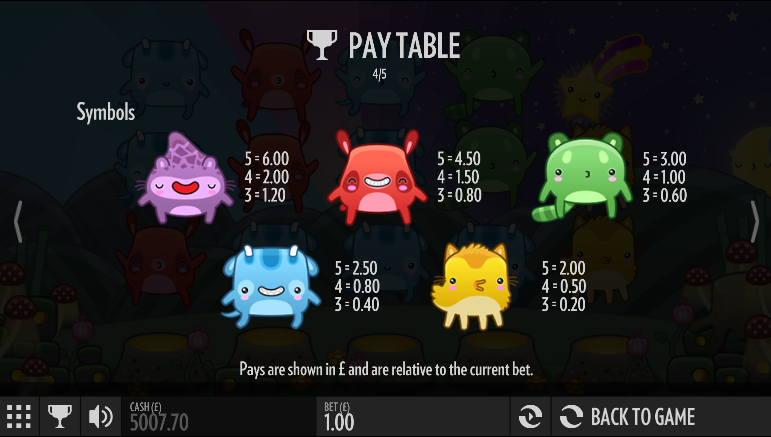 It’s cute, it’s colourful and it’s another addition to the enchanting range of online slots produced by Thunderkick Games. Toki Time is the name of the game here and we think it’s design is reminiscent of Japanese console games from the early 1990s, right down to the authentic soundtrack so keep reading to find out more.

Toki Time is a five reel slot with three rows and just eleven fixed paylines; rather than spinning reels the symbols are fired out of holes in the ground before coming to a halt. Behind those symbols is a stylised landscape and the sky behind the hill slowly rotates, alternating between a blue sky and a starry night.

There are just seven symbols and these are all little characters who we shall describe by colour – yellow, blue, green, red and purple plus a cloud and a star.

The wild symbol is a little sheep-like creature which appears only on reels two and four; it also activates the bonus feature described below.

It’s possible to form winning combinations from right to left as well as left to right which makes up somewhat for having just eleven paylines.

This is where that little wild sheep comes in handy; he squeezes out of the hole in the ground under reels two and four and fills up that whole reel. If he then contributes to a winning combo you will get a free respin while he stays in place. The spins will continue until you no longer form a win.

The ideal scenario is to land the wild symbols on reels two and four simultaneously (as in the screenshot above) which should result in some big wins.

Toki Time is another excellent slot from Thunderkick Games which proves a slot can be compelling and addictive with minimal bonus features. There’s a better-than-average RTP of 97.1% and of course you can always mute the sound if becomes annoying.