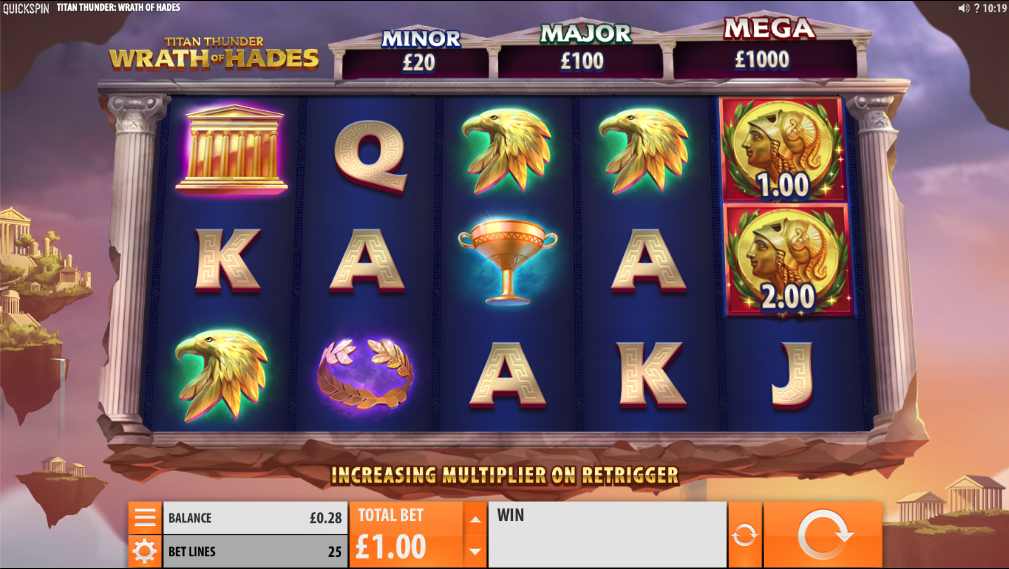 Hades was the Greek god of the underworld and he also gave his name to the realm over which he ruled; Titan Thunder: Wrath of Hades is an online slot from Quickspin Gaming dedicated to this character and from £0.25 per spin it offers free spins and jackpot prizes.

Titan Thunder: Wrath of Hades is a five reel slot with three rows and twenty five fixed paylines; rather than being set in some subterranean world we’re floating above the clouds closer to Olympus with the reels held between damaged columns.

High value symbols include the golden temple, the eagle, the cup and the wreath; J, Q, K and A represent the lower values; Zeus is wild and he’ll substitute for all standard symbols – Hades and the coins are the bonus symbols.

Landing at least six of the stacked coin symbols anywhere in view will kick this feature of and it starts with three respins and those coins locked in place; any new coins landing will also freeze in place and reset the number of spins to three again. When all positions are full or there are three spins with no new coins you’ll win the following:

This is triggered by landing at least three of the Hades scatter symbols anywhere in view and you’ll receive eight free spins initially but this can be retriggered when the spins start in the same way. The multiplier for all wins during this round increases by 1x.

We always like a visit to the realms of the Greek Gods and while there’s not much new to report in Wrath of Hades it’s got everything we need to create an entertaining slot – free spins, jackpot prizes and sharp graphics. If you’d like to try the original Titan Thunder game click here.