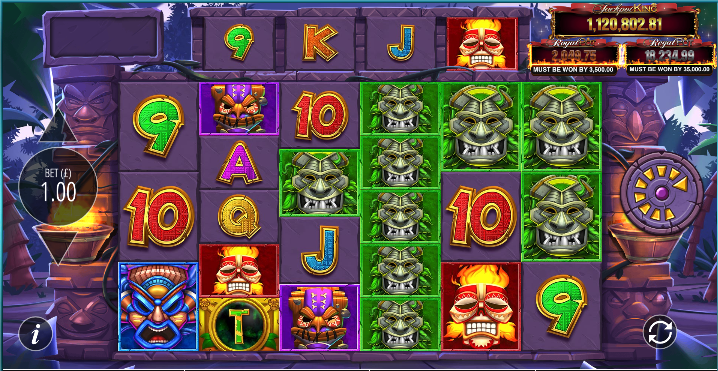 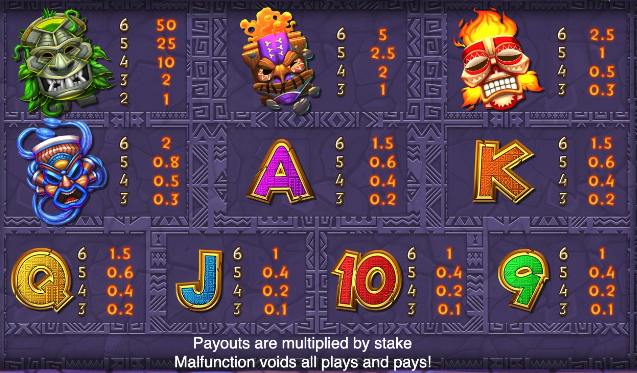 Even a virtual trip to the Pacific Islands is enough to put a smile on our faces and here we’re doing it in the company of Tiki Treasures Megaways, an online slot from Blueprint Gaming which uses BTG’s clever Megaways payline structure to create more than one hundred thousand paylines – read all about it below.

Tiki Treasures Megaways is a six reel slot with up to seven rows on each reel; the horizontal reel above adds the extra variation which enables a possible 117649 paylines. The reels spin on a stone structure flanked by mask totems with hints of jungle in the background.

The higher value symbols are four scary masks while the lower values are the standard 9, 10, J, Q, K and A.

The golden skull is wild, it appears only on horizontal reel in the base game and it will replace all others symbols to create winning combos except for the letters ‘T’, ‘I’, ‘K’ and ‘I’ which are the bonus icons.

Always something we enjoy, collapsing reels means that any symbol in a winning combo will disappear and be replaced by more falling in from above – this process continues until there are no more wins.

The question mark is the Mystery Symbol which will transform into one of the other standard symbols whenever it lands.

This is triggered by landing the letters TIKI anywhere in view and you’ll now get to choose from one of the following options:

With each successful collapse the win multiplier will increase by 1x; in addition any extra triggering scatters will award more spins to the starting total. During the round three or four scatters in view will award five or ten extra spins.

Paws of Fury is part of Blueprint Gaming’s Jackpot King progressive jackpot series and the feature  is triggered by landing five jackpot symbols on the reels. You’ll then play a reel set where the aim is to collect crowns before the round ends – manage at least 15 and you’ll get to spin the wheel of fortune which could win you the progressive jackpot.

The Megaways payline structure adds a bit extra to a slot which would probably be enough fun without it but the huge number of paylines added to the cascading reels, free spins and progressive jackpot results in a winner.