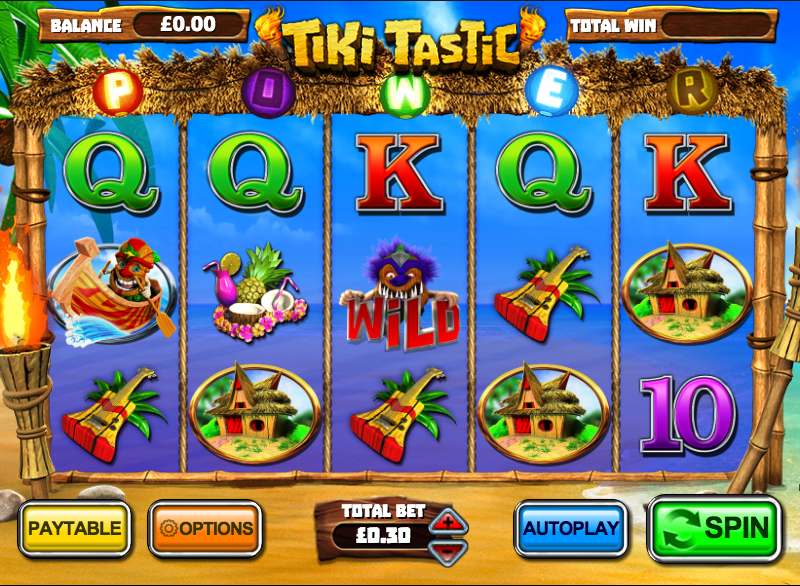 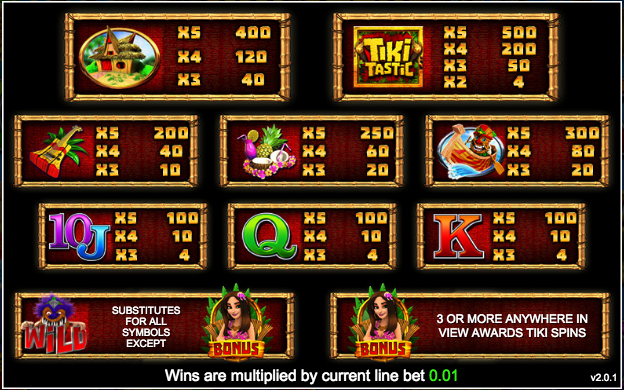 The sunny South Pacific is our destination now, at least in a virtual manner as we check out this online slot from Inspired Gaming; it’s called Tiki Tastic and it’s themed around the human-like stone carvings found in that part of the world. It comes with two separate bonus features and they’re all described in more detail below.

Tiki Tastic is a five reel slot with three rows and twenty fixed paylines; the reels are formed from a bamboo frame topped with thatch and behind the symbols we can see a wide expanse of calm ocean underneath a blue sky.

There are five theme-related symbols including a native hut, the Tiki Tastic logo, a stringed instrument, a fruity meal and the game’s character rowing a boat; lower values are the standard 10, J, Q and K.

The wild is represented by a big red ‘Wild’ and it will substitute for all others in a winning combo except the Tiki Girl scatter which activates the main feature.

This is triggered by landing three or more of the Tiki Girl scatter symbols anywhere in view and you will now be prompted to select five chests from the nine available. Your picks will determine the number of spins awarded and a multiplier for any wins.

If the Tiki Girl appears on reel three during the spins she will award one of five mini-features:

The letters P.O.W.E.R appear on reels one to five consecutively and when they do the spaces above those reels will light up. When all are lit you will be asked to pick one of three chests which will award a modifier and one free respin:

Tiki Tastic contains some interesting extra features and although the graphics may not be state of the art it’s colourful and enjoyable enough to keep one’s attention. It comes with an RTP of 95.00%.