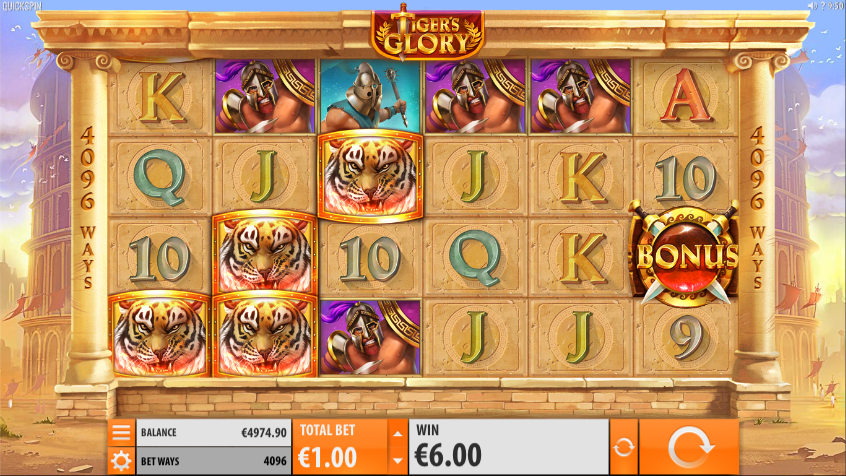 The gladiator’s arena of Ancient Rome is the theme of this online slot machine from Quickspin Gaming which pits  heavily-armed combatants against a wild animal; it’s called Tiger’s Glory and there’s money to be won when this big cat starts to lose his temper.

Tiger’s Glory is a six reel slot with four rows and 4096 ways to win; those reels spin between two columns on a structure standing in front of an impressive colosseum where all the action is about to take place.

The higher value symbols include the tiger and four gladiators with a variety of weaponry and armour; 9, 10, J, Q, K and A represent the lower values.

The golden laurel wreath is wild and it will substitute for all others to help form winning combos except for the scatter symbol and the ‘enraged tiger’ (in the free spins).

This is triggered by landing at least three of the sword/shield scatter symbols anywhere in view for which you will receive the following:

This is where the fun begins because the enraged tiger now appears and each time he lands he’ll battle a gladiator; if the tiger wins that encounter he’ll lock in place and if he’s the first locked on that reel an extra free spins will also be awarded. Up to six extra spins can be won.

Each tiger (enraged or otherwise) symbol acts a scatter symbol during the free spins round but unfortunately there’s bonus symbol in play so the round can’t be retriggered.

Tiger’s Glory is a slot which sides the player with the tiger against the gladiators and rightly so – it’s also got a great free spins round and some intricate graphics to enjoy. There’s an RTP of 96.51%.