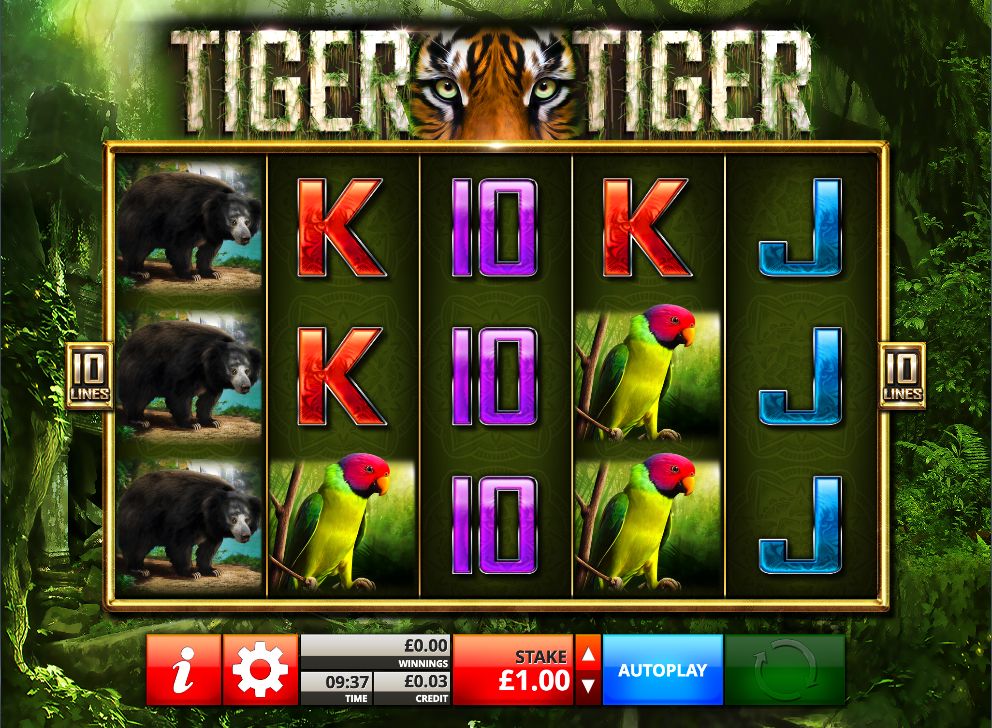 The roar of a wild animal greets players when this online slot from Reflex Gaming first loads up and that’s to let us know that we’re dealing with some big creatures – this is Tiger Tiger, a game which includes a clever free spins round and some very wild reels.

Tiger Tiger is a five reel slot with three rows and just ten fixed paylines; those reels spin within a neat golden frame which sits against a backdrop of dense green jungle, barely lit by the small shaft of sunlight breaking through the forest canopy.

The higher value symbols include a black bear, an elephant, a parrot and the game’s logo; 10, J, Q, K and A make up the lower values.

The wild is a gold ‘Wild’ against a purple tiger backdrop and it will substitute for all others to help form winning matches except for the tiger bonus symbol on reels one, three and five – the tiger is also a wild.

This is triggered by landing three of the tiger wild/bonus symbols anywhere on reels one, three and five; you’ll now receive ten free spins on a reel set which includes a gem – collect five gems to activate the second reel set, ten, for the third reel set and fifteen for the fourth. Each additional reel set awards two extra free spins.

Collecting twenty gems throughout this round will complete the gem trail and award the jackpot prize.

The Wild Reels occur randomly in the base game and the reels will shake, adding extra wilds and hopefully resulting in a nice win.

Tiger Tiger is a reasonably basic slot with a nice theme, some appropriately wild sound effects and a free spins feature which adds a little something extra; there’s an RTP of 94.72% which is slightly lower than average.