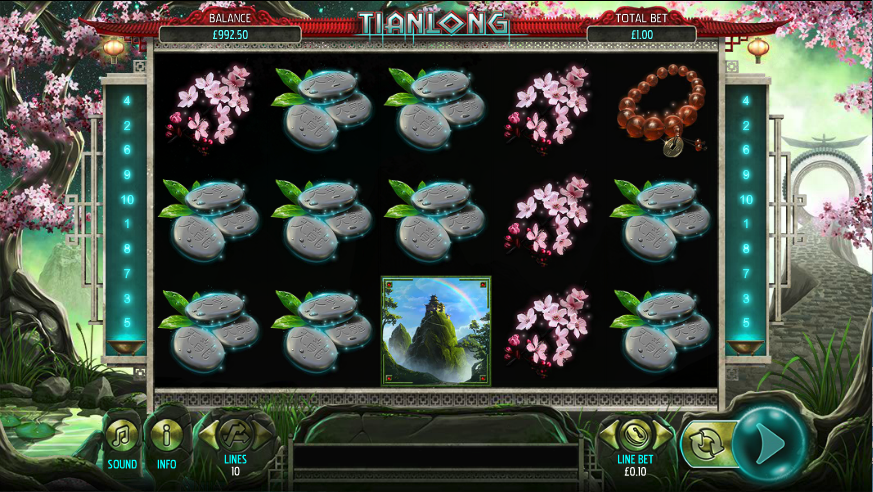 Online slots come in many shapes and sizes but one of the more common themes is a trip to the mysterious Orient; as well being a mythical Chinese dragon, Tianlong is a game developed by NextGen Gaming/Games Lab which takes us back east once more to enjoy some high quality graphics and two separate bonus features.

Tianlong is a five reel slot with three rows and up to ten paylines; those reels spin on the walls of a red-roofed temple while in the background there are various blossom trees, stone paths and rocks rising vertically from the greenish water. Wins can be formed from right to left as well as left to right.

There are just six base game symbols and these comprise a temple on a mountain top, a Chinese lantern, a bonsai tree, a jade ornament, a red necklace and some inscribed stones.

Tianlong the dragon is wild and appears only on reels two, three and four; he will substitute for all other symbols except the scattered phoenix to make a winning combo.

This is triggered every time the Tianlong wild appears on the reels; each reel containing the dragon will be held and the wild will expand to cover all positions on that reel. Any wins will be paid and then you’ll receive a free respin – any extra wilds landing will trigger a further respin.

Tianlong is a lovely atmospheric game with some very high quality graphics and captivating sound effects; the bonus features offer some variations on the usual fare and it comes with an RTP of 95.24%. Highly recommended.