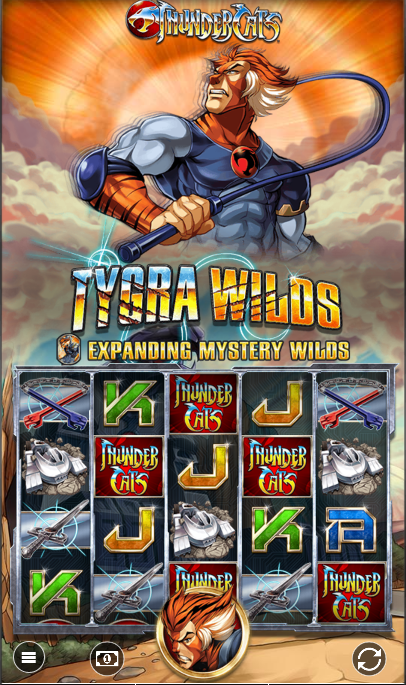 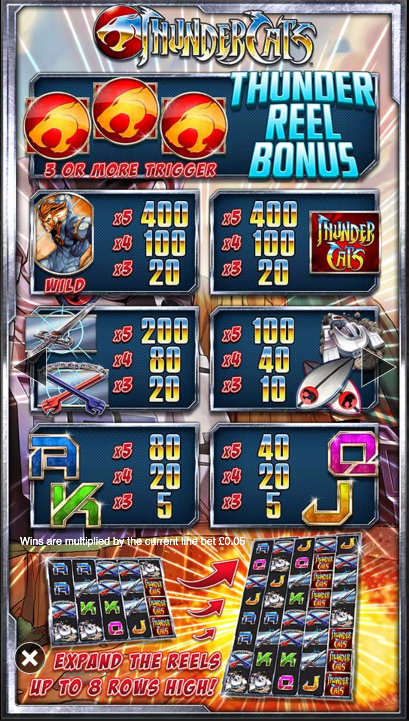 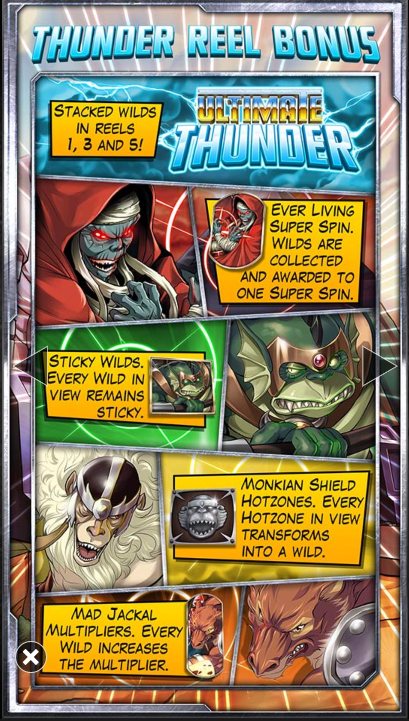 Anyone who admits to remembering the original Thundercats cartoon in the mid-late 1980s is probably happy to show their age but it did return briefly for a short spell in 2011 and a video game in 2012; the Thundercats were catlike superheroes with various powers and this Blueprint Gaming slot is a tribute to them.

Thundercats is a five reel slot with four rows and thirty fixed paylines but as you can see from the screenshot above there’s a huge space above those reels occupied by a character and this area has a purpose in one of the features which we shall explain presently.

The high value symbols are the Thundercats logo, the sword, the weapons which look like back scratchers, the vehicle and the surfboards; J, Q, K and A represent the lower values.

Tygra is the wild symbol and he will substitute for all others to form winning combos except for the Thunder Reel bonus icon.

This is triggered by landing three, four or five of the Thunder Reel bonus symbols anywhere in view and you will get to spin the Thunder Wheel to determine which free spins option is awarded. Four bonus symbols will eliminate the Jackalman spins from the wheel and five will immediately award the Ultimate Thunder Spins.

When the bonus is initiated it’s possible to gamble a Thunder Wheel award for a better one.

Landing the special symbol on reel five will spin a wheel and pick a character for a mini-feature as follows:

Snarf can appear during any of the above phases to enhance the win/modifier and to place more bonus symbols on the reels.

This can occur randomly on any spin and the reel height will increase from four rows to eight rows.

It will take a lot of searching to find a slot with more bonus features than Thundercats but once you get your head round the various features it’s all very enjoyable with some great cartoon graphics and a worthy tribute to the original series; this game comes with an RTP of 95.50%.