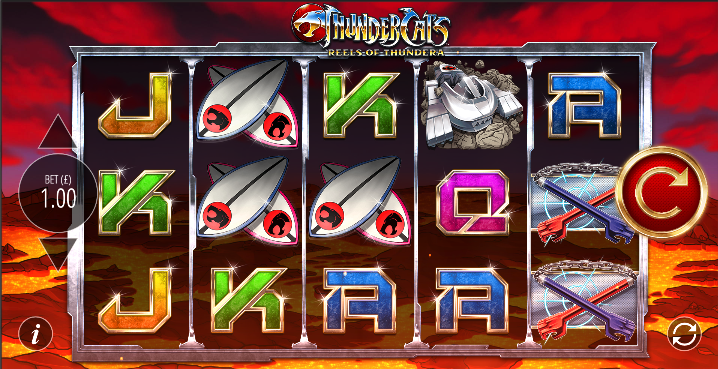 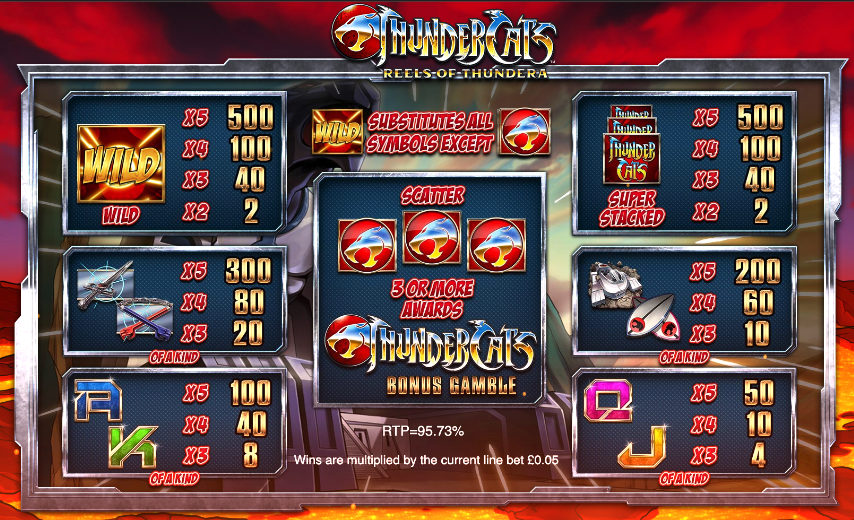 If you’ve previously enjoyed Blueprint Gaming’s Thundercats online slot then no doubt you’ll also appreciate Thundercats: Reels of Thundera, a sequel to the original which is bigger, better and full of themed bonus features – read all about it below.

Thundercats: Reels of Thundera is a five reel slot with three rows and twenty fixed paylines; the music from the TV show accompanies the spins which take place on silver reels against a volcanic backdrop.

The high value symbols include the stacked Thundercats logo, the famous claws, the sword, the vehicle and the surfboard; J, Q, K and A represent the lower values.

The wild is the golden ‘Wild’ which will replace all standard symbols to help form winning combinations; the scatter symbol is the gold and silver logo.

This is triggered by landing at least three of the scatter symbols anywhere in view and you’ll get to spin a wheel which will award one of the following six games:

These features are listed in order of potential value and when the feature is triggered you’ll have the opportunity to gamble a less valuable one for a better one.

The following six features can be triggered at random during any spin:

If that’s not enough the following four mini-features can hit on any non-winning spin:

If Blueprint Gaming are aiming for a world record number of features in a slot machine then they may have managed it here; superlatives aside, Thundercats is a lot of fun and blends the characters and music from the cartoon seamlessly into this game – certainly recommended.