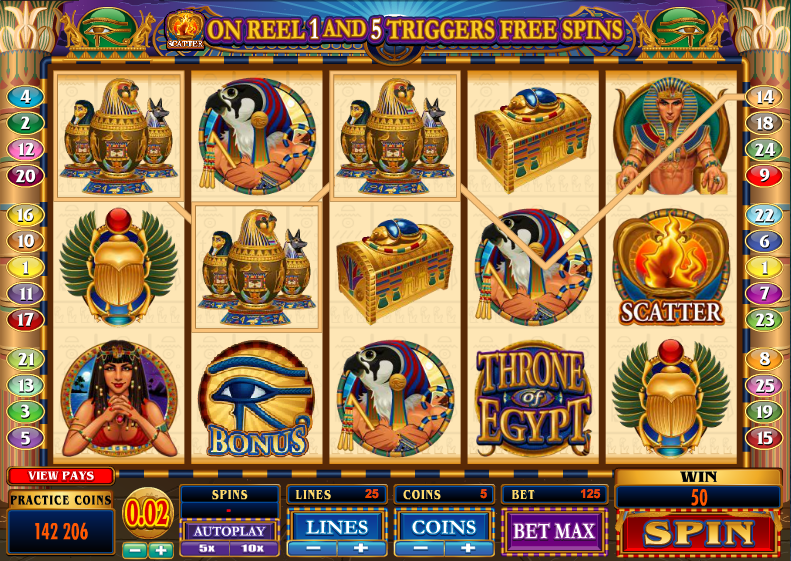 Sometimes you load up a new slot and it looks pretty similar to one or two you may have played before; that’s the case with Throne Of Egypt from Microgaming and it seems familiar because it joins a small genre of online slots with Ancient Egypt as it’s theme.  Read on to find out if there’s anything to differentiate this game from similar-themed slots.

Throne Of Egypt does actually have plenty to recommend it but let’s start with the basics – it features five reels and twenty five paylines and the reels are framed by columns on either side while the Eye of Horus is  visible at the top.

There are loads of Egyptian-themed symbols including gold scarab beetles, treasure chests, ornate vases and several gods – some of which have made appearances in various similar-themed slots.  The game’s logo is the wild symbol, the burning flame is the scatter and the Eye of Horus is the bonus symbol.

The Throne of Egypt wild symbol can be stacked on all reels and that means the symbols can appear on top of each other, giving the player more potential winning combos.

Landing the flame scatter symbol on reels one and five will reward you with fifteen free spins; that’s a decent amount and to add to the fun, all wins landed during this phase are doubled.  This feature can also be re-triggered by landing more scatters in the appropriate places.

This is the game’s big bonus feature and you can activate it by landing the Eye of Horus symbol on reels two, three and four.  You must now work your way through three chambers as follows:

The two bonus features mean that this is a worthy addition to the Ancient Egypt genre – in fact it might be the most entertaining one we’ve played to date.  If you’re going to try one Egyptian-themed slot today, make it this one.