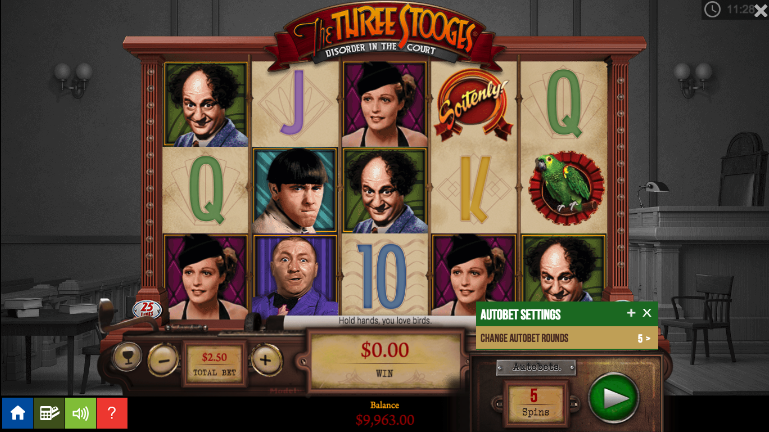 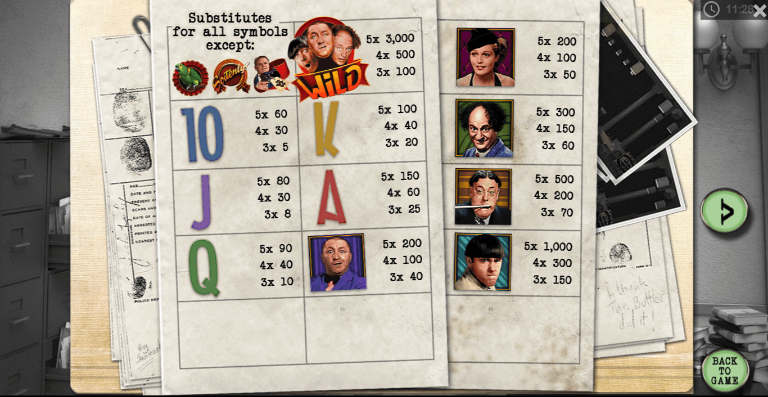 You’ll have to go a very long way to find someone unaware of the comedy gifts of Moe, Larry and Curly, the trio of slapstick artists who entertained their audiences for forty years or so. Of course they are better known as The Three Stooges and that’s also the name of this online slot from Pariplay – read all about it below.

The full title of this game is The Three Stooges: Disorder In The Court (which was a 1936 production) and it’s a five reel slot with three rows and twenty five fixed paylines; the reels spin on a wooden frame which sits against a backdrop consisting of a black and white courtroom scene.

There are five character symbols here including the Stooges along with Gail Tempest and the attorney from the film; lower values are 10, J, Q, K and A.

The wild symbol is a the three Stooges altogether and it will replace all others in a winning payline except for the ‘Soitenly’, Polly the Parrot and the Tag bonus icons.

This is triggered by landing at least three ‘Soitenly’ scatter symbols anywhere in view for which you will receive:

Landing more scatters during this round will trigger more free spins.

Trigger this by landing Polly the Parrot anywhere on reels one and five and you will get to play a picking game in which you must try and hit the parrot amongst the jurors; the prizes are multipliers and you can keep swinging until you miss three times.

This is triggered by landing the Tag bonus symbols anywhere on reels two, three and four and you will be taken to a second screen on which you must pick three items from the trial objects for prizes.

It’s tough to channel the spirit of comedy geniuses but The Three Stooges is a top class slot which pays a great tribute to Moe, Larry and Curly, particularly in the way it integrates Disorder In The Court into the gameplay – it’s well worth checking out.