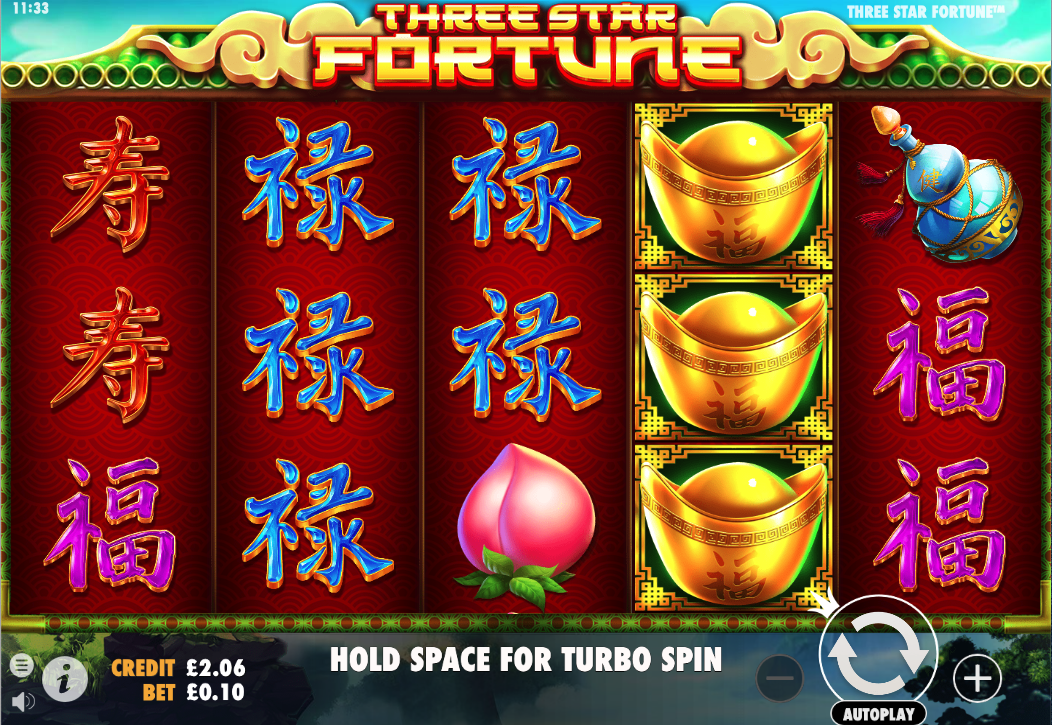 Chinese lanterns, ancient scrolls and ornate gold ingots mean only one thing – this is an online slot machine with China as its theme; it’s called Three Star Fortune, it’s developed by Pragmatic Play and it offers players free spins triggered by wilds and paylines which work both ways.

Three Star Fortune is a five reel slot with three rows and ten fixed paylines; we can’t really see what’s going on in the background but the occasional cherry blossom floats past those reels which are fixed beneath the green roof tiles of a traditional structure. Those ten paylines are really more like twenty because they pay in both directions – right to left as well as from left to right.

The high value symbols include the expensive gold ingot, a scroll inlaid with gold and a blue vial containing something mysterious; three Chinese characters  in pink, blue and red make up the lower values.

There are three wild symbols all represented by cheery Chinese chaps and they appear on reels two, three and four respectively.

Every time a wild symbol lands it will expand to fill all positions on its reel after which it will lock in place an award one free respin; if any more wild symbols land on this respin then they too will lock and one more respin will be awarded. Ideally you’ll end up with reels two, three and four completely wild for some really big wins. When no new wild symbols land the round is over.

Three Star Fortune is a bright and colourful foray into Chinese culture which revolves around landing those wild gents to trigger the feature; you’ll be as happy as they are if multiple wilds land!