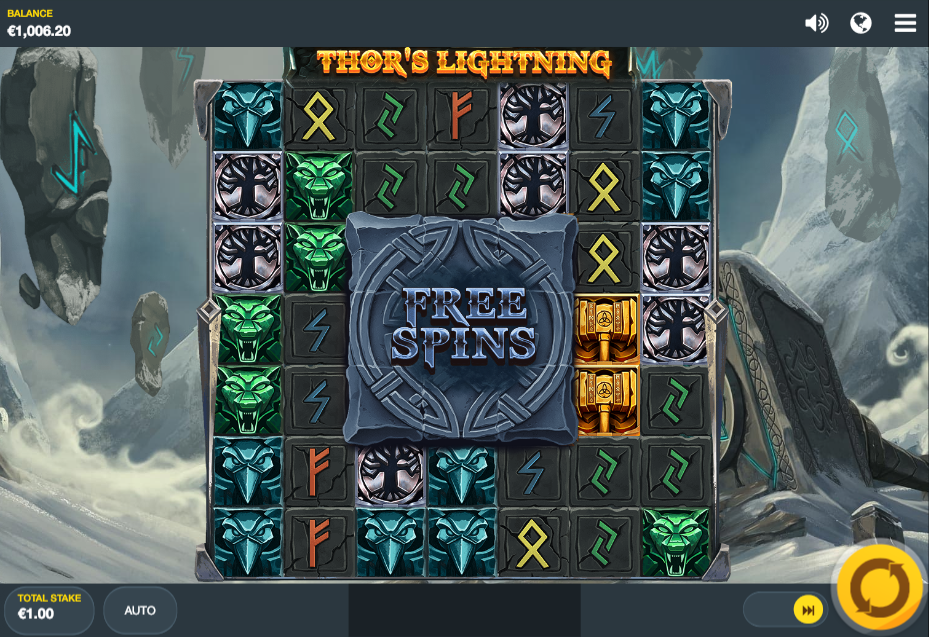 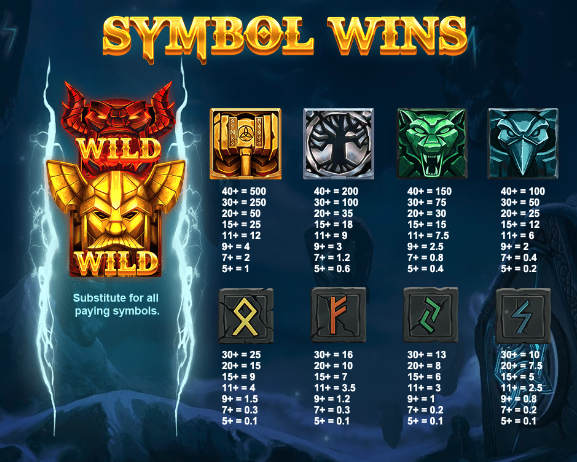 If you’d like to try something a little different then we may have something for you here with Thor’s Lightning – it’s an online slot from Red Tiger Gaming with some interesting gameplay and a clever way to trigger the main feature.

Thor’s Lightning plays out on a 7×7 grid which floats against a backdrop of mountains, ice, snow and floating rocks sporting various runes. The gameplay works like this – create clusters of at least five matching symbols horizontally or vertically and they will disappear to be replaced by more falling in from above with the potential for more matches. We’ll explain the large Free Spins centrepiece shortly.

There are four high value symbols and these are Thor’s hammer Mjolnir, Yggdrasil the Tree of Life and stylised animals – a wolf and an eagle; four runes in yellow, red, green and blue represent the lower values.

Thor’s helmet is wild and it will replace all others to help form winning combinations – there’s no scatter/bonus symbol in this game.

The following two features are triggered randomly in the base game:

This round is triggered by by forming winning clusters adjacent to the Free Spins tiles, making them uncover what’s underneath – if the outer eight tiles are revealed on the same spin then one of the following free spins rounds will be randomly selected awarded:

Valhalla Spins – awards a random number of spins and the reels are replaced with ones containing only falling golden shields; any that stick to the reels after each spin reveal a multiplier at the end which is totalled and applied to the total stake.

Muspell Spins – awards a set of spins with high value symbols only; during this round Lava Showers (removes all of one symbol) and Lava Flows (adds more matching symbols on adjacent reels).

There’s plenty to like about Thor’s Lightning and we would say it’s possibly one of our favourites from Red Tiger Gaming; collapsing reels, base game features and two free spins rounds make it a winner.