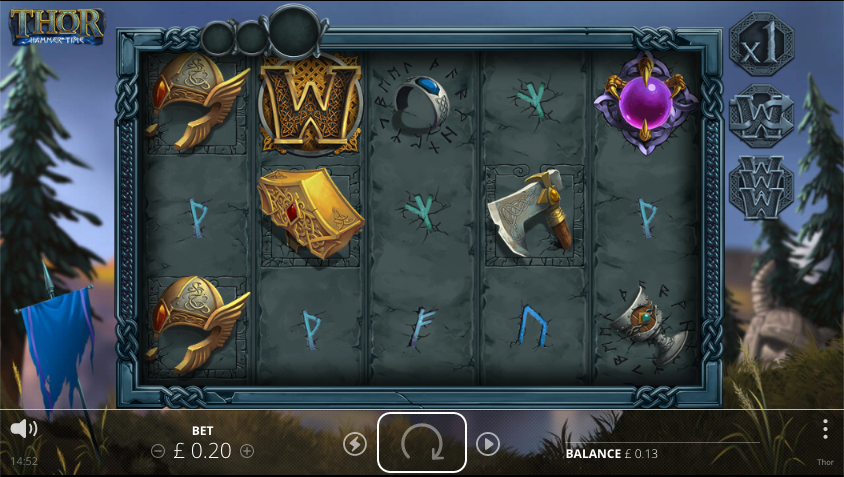 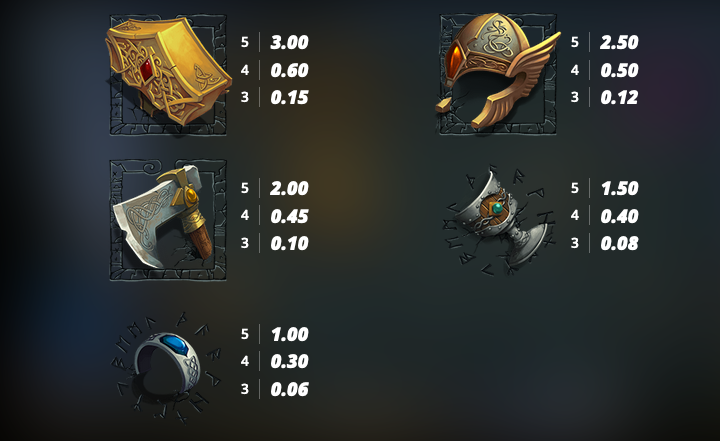 The Norse god Thor and his famous hammer Mjolnir are the themes of this online slot machine from Nolimit City; it’s called Thor: Hammer Time and it offers players free spins and sticky wilds amongst its bonus features.

Thir: Hammer Time is a five reel slot with three rows and twenty fixed paylines; a carved stone frame contains those reels which float against a backdrop of a chilly Scandinavian landscape.

The high value symbols include Mjolnir, an engraved axe, a ring, Thor’s helmet and a goblet; five runes represent the lower values.

The wild is big, golden ‘W’ which will replace all standard symbols to help form winning combinations; Thor on reel five and the purple energy symbol are the bonus icons.

This is triggered whenever Thor lands on reel five and he will award a win multiplier, sticky wilds or sticky wild reels; Thor will nudge down one position on each subsequent spin and the chosen feature will remain in play while he’s still in view.

This can occur on any spin and all runes in view will transform into a matching one.

This can also occur on any spin and the ring, goblet, helmet and axe will transform into Mjolnir.

Landing two purple energy scatter symbols on the reels will freeze those reels in place and respin the others in the hope of landing a third, fourth or fifth energy symbol; those original symbols will nudge down one position with each spin and the round is over when they fall off the bottom.

However if you can collect three or more scatters you’ll trigger the Asgard Spins in which Thor will appear more frequently on reel five and he can also award two extra spins along with the other features from Thor’s Lightning. As an extra bonus, with each spin that Thor remains on the reels as he nudges down, an extra feature will be awarded which can result in some big wins.

As with other Nolimit City slots, Thor: Hammer Time is a well designed and high quality game with several clever bonus features; it weaves the legend of Thor into the gameplay very effectively and comes highly recommended.