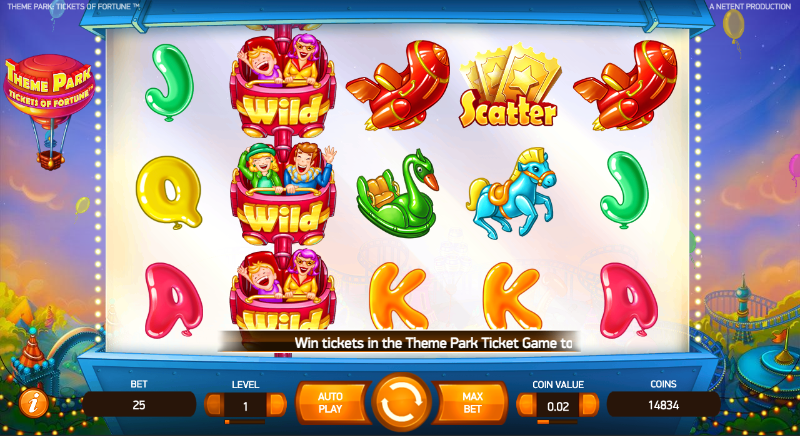 A day at a theme park is always something to remember and now there’s a way to continue the fun on your computer screen or mobile device with this colourful online slot from Net Entertainment. It’s called Theme Park: Tickets of Fortune and it’s a feature-filled ride with plenty of prizes available to be won – read all about it below.

Theme Park: Tickets of Fortune is a five reel slot with three rows and fifty fixed paylines; the background to those reels is a lofty view of the theme park with balloons drifting up into the air past sunlit clouds and a hot air balloon.

There are five high value symbols, all things to ride on – a spaceship, an aeroplane, a bumper car, a swan and a horse; lower values are the standard 10, J, Q, K and A.

The wild symbol is stacked and is a set of rollercoaster cars, one for each reel position; it appears only on reels two, three and four and will substitute for all others except the ticket scatter, the claw bonus and the wheel bonus icons.

You’ll like this if you’ve ever tried the mechanical claw at an arcade or fairground; it’s triggered if the claw symbol lands anywhere on reel five in the base game and you will get to watch the claw grabbing a toy from beneath the reels – it will be worth a prize of up to 15x the stake.

This is triggered by landing three of the ticket scatter symbols anywhere on reels three, four and five; a Wheel of Fortune now appears so stop it spinning to reveal a certain number of tickets. You now get to select games to play from the theme park map appropriate to the number of tickets you have:

This is another way to play a ticket game and it’s triggered by landing the wheel symbol anywhere on reel five in the base game; spinning the wheel will determine the game to be played.

Theme Park is an excellent addition to Net Entertainment’s ever-growing range of quality slots and it’s got more bonus features than you can shake a stick at; the atmosphere is well-crafted, the graphics are great fun and it comes with an RTP of 96.52%.