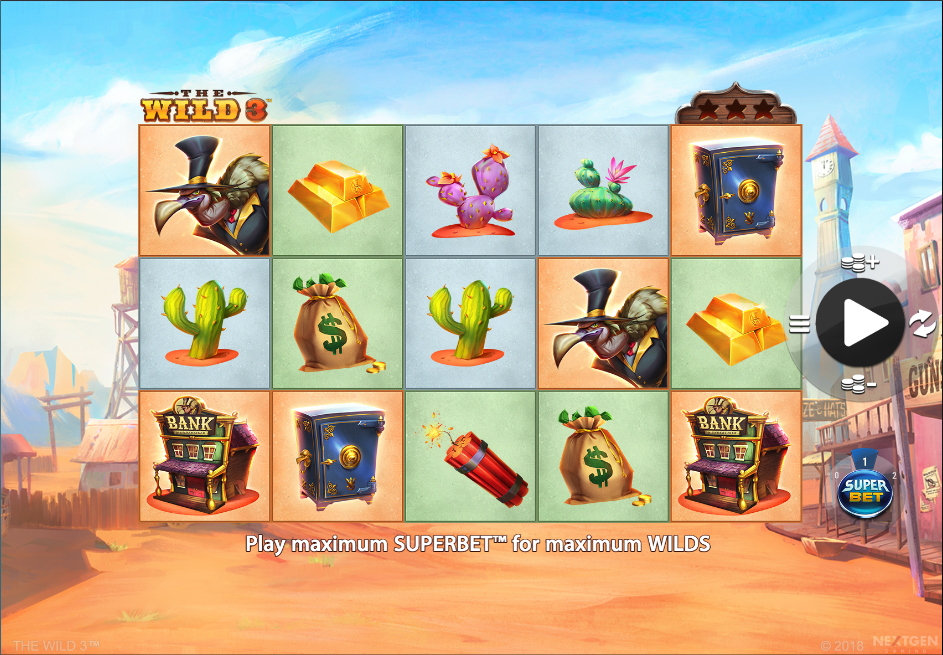 It’s a little known fact that animals played a big part in the early days of the Old West, occupying various civic (and uncivil) positions; at least that’s the story behind The Wild 3, an online slot from NextGen Gaming with more features than spittoons and saloons combined.

The Wild 3 is a five reel slot with three rows and ten fixed paylines; the backdrop to those neat reels is a shabby western town with sandy streets, sweating under a hot, blue sky.

All the symbols are theme-related and include the vulture, the bank, the safe, the stack of gold bars, the bag of cash, the sticks of dynamite and three different strains of cacti.

There are three wild symbols – the raccoon, the coyote and the bull – and all will replace all others to help form winning combos except for each other and the wanted poster scatter symbols.

The Wild 3 comes with NextGen’s Superbet option which allows players to spend a bit more for some extra features:

The wild animals have the following Superbet features associated with them:

Everystake level at which you pay is associated with a set of three missions selected from the following list:

Completing the three missions for your stake level will trigger Rob the Rich which is a picking game in which you can win cash prizes and extra picks.

This is triggered by landing two bonus symbols on reels two and four and one wild symbol on reel three; you’ll receive five free spins with the wild frozen in place until the round ends – any additional wilds will also freeze in place (except raccoons and coyotes). One extra spin is awarded for each extra frozen wild and bonus symbol landing.

Trigger this by landing two bonus symbols on reels two and four and you’ll receive up to three respins with those symbols held in place to try and land the wild which will award the free spins.

There’s a lot to get your head around in The Wild 3 but it becomes a bit clearer once the link between the Superbet and the wild animals is established. There’s plenty to like about this slot with its interactivity and multiple features and it’s worth mentioning that the RTP increases from 95.54% – 96.79% as you work your way up through the Superbet options.