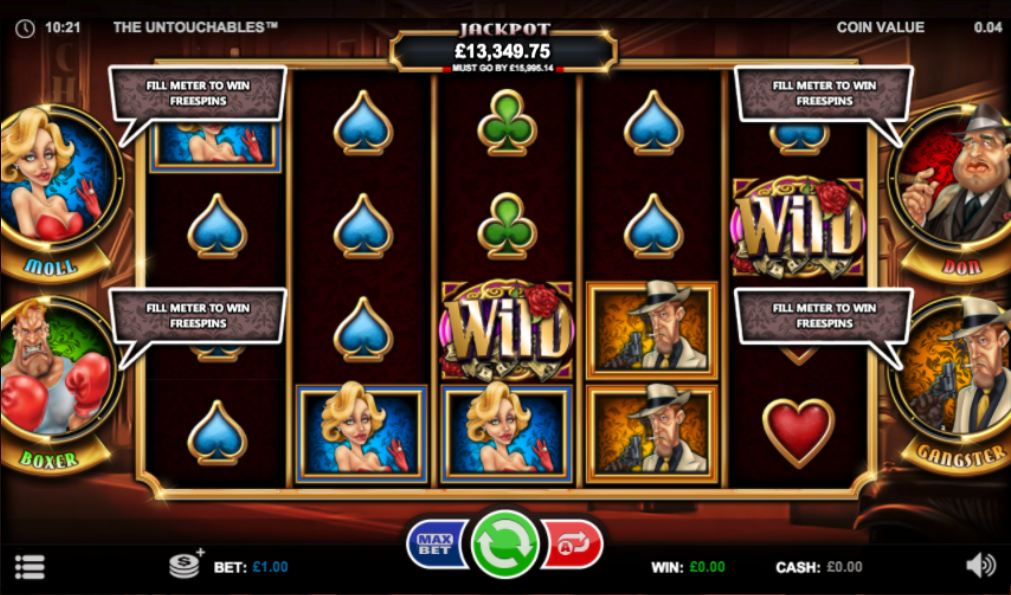 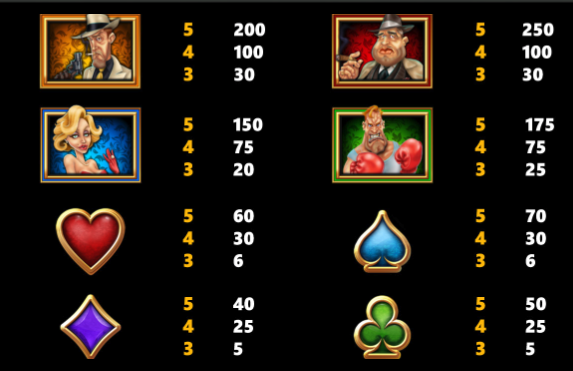 Most online slots fans will be familiar with Elliot Ness’s band of prohibition era police officers and their pointless battle against alcohol in Chicago; they were named The Untouchables which also happens to be the title of this online slot machine from Betsson which comes with some themed free spins rounds.

The Untouchables is a five reel slot with four rows and twenty five fixed paylines; those reels are framed in gold while four characters watch proceedings from either side, waiting for their chance to get involved in the features.

Those four characters – the Moll, the Boxer, the Don and the Gangster – are also the high value symbols while playing card symbols in red, blue, purple and green are the lower values.

The wild is a big, gold ‘Wild’ which will replace all other symbols to help form winning combinations except for the case of money scatter.

Each of the characters to the side of the reels has a meter attached and these meters are gradually filled as combos involving that character are formed; once a meter is filled you’ll win eight free spins with a character feature:

This is triggered by landing at least three of the case of money scatter symbols anywhere in view and you’ll be whisked to a screen displaying thirteen bags with multiplier values; over four rounds they will slowly disappear until only one remains but after two rounds you’ll be offered a cash amount or some free spins which you can accept if you want. Otherwise you’ll win the final bags’ value.

The jackpot is won randomly when the prize amount reaches a certain value so as it increases the chances of winning also increase.

The Untouchables is a slot with plenty of cartoonish charm, a soundtrack to match and the character meters ensure that you’ll trigger some free spins as long as you play long enough. It’s a fast moving game with an engaging theme and an RTP of 96.14%.